North Arm Cove is a suburb of the Mid-Coast Council local government area in the Hunter and Mid North Coast regions of New South Wales, Australia, located adjacent to Port Stephens and extending well north of the Pacific Highway. The suburb is sparsely populated with most of the population living in the southern portion of the suburb.

It was under consideration as a possible site for the national capital before Canberra was chosen and has many dirt roads laid out in the bushland that date from the original subdivision in 1918. 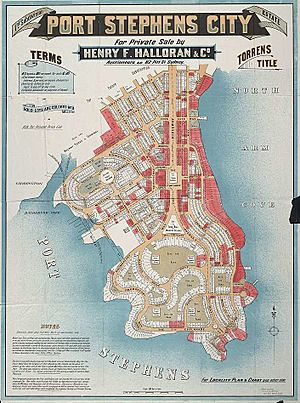 Land from the 1918 subdivision is zoned "non-urban", meaning that construction of buildings is not permitted under any circumstances. Because of this, land sales at North Arm Cove have been the subject of controversy for many years, even being raised as a matter in the NSW Parliament. Despite this, many blocks are purchased as investment properties and/or for use as weekend retreats. However, land is regularly sold and resold as owners become frustrated with being unable to develop their properties.

Restrictions on land use in the area has meant that a limited number of residential blocks are available and the suburb's population is concentrated mainly in the village of North Arm Cove, which is located on the western shore of North Arm cove itself, and the northern shore of Port Stephens. Many of the small houses that used to be in the area have been torn down and replaced with more expensive, modern homes.

To the north of the Pacific Highway, land use is mainly rural and throughout the suburb kangaroos, wallabies and koalas are commonly found. A Club Med resort was to be built however local objection has halted the plan.

All content from Kiddle encyclopedia articles (including the article images and facts) can be freely used under Attribution-ShareAlike license, unless stated otherwise. Cite this article:
North Arm Cove, New South Wales Facts for Kids. Kiddle Encyclopedia.