Tanilba Bay is a suburb of the Port Stephens local government area in the Hunter Region of New South Wales, Australia. It is located on the Tilligerry Peninsula adjacent to the bay from which it got its name. "Tanilba" is said to mean "place of white flowers" in a local Indigenous language, presumably a reference to the flannel flowers which formerly thrived in the area. At the 2011 census Tanilba Bay had a population of 2,921.

The centrepiece of this small town is Tanilba House which is one of Australia's oldest buildings. In 1831 Lieut William Caswell, Royal Navy, received a land grant of 20.2 hectares (50 acres), along with an assignment of convicts who cleared the land and built Tanilba House from locally quarried stone. Ten acres (4 hectares) on the eastern side of the hill was used as a vineyard soon after the house was built. An olive tree planted in the vineyard survives to this day.

In 1931 Tanilba House was owned by Henry Halloran who designed such structures as "The Temple", which is behind Tanilba House on the road leading to the house, and the elaborate gates at what were then the north and south entrances to the town. Today the town has expanded and the still incomplete gates stand inside the town limits. Tanilba House is surrounded by houses.

It was proposed that the Prime Minister of Australia would live here until Canberra was settled.

Tanilba House and "The Temple"

The main beach in Tanilba Bay is located on the southern side of Port Stephens and runs from east to west. The eastern part of the beach accessed along a board walk with steps down to small inlets that provide access to the beach under the protection of native trees that a known for their koala population. The centre and western parts of the beach are flanked by various picnic areas and parks and boat ramps with the western most end having a wide stretch of sandy beach. At very low tide the sandy flats are exposed and on occasions during the high tide the water covers all the sand. The bay is protected from southerly winds which makes it a popular place for water sports such as skiing. 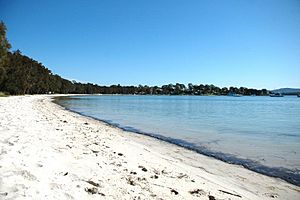 Located along the western end of the bay is a large sandy beach.

All content from Kiddle encyclopedia articles (including the article images and facts) can be freely used under Attribution-ShareAlike license, unless stated otherwise. Cite this article:
Tanilba Bay, New South Wales Facts for Kids. Kiddle Encyclopedia.