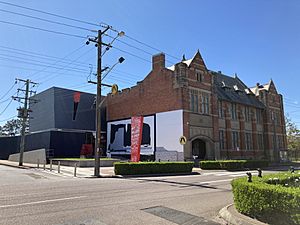 Maitland City Council began purchasing works of art in 1957 which formed the basis of the collection as it is today. In 1975 Brough House, in Church Street Maitland became the first Maitland City Art Gallery site. MRAG opened at its current site on High Street Maitland in November 2003. The Federation gothic building once housed the Maitland Technical College opened in 1910. In 2008 the gallery closed for redevelopment and was reopened on the 15 August 2009 by the artist Margaret Olley.

All content from Kiddle encyclopedia articles (including the article images and facts) can be freely used under Attribution-ShareAlike license, unless stated otherwise. Cite this article:
Maitland Regional Art Gallery Facts for Kids. Kiddle Encyclopedia.