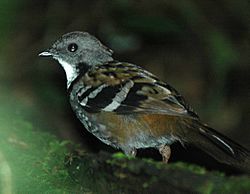 The Australian logrunner (Orthonyx temminckii) is a species of bird that is endemic to eastern Australia where it uses unique foraging techniques and adaptations to search for its food on the floors of temperate, subtropical, or tropical moist lowland forests in south-eastern Australia. Until 2002, it was widely considered to be conspecific with the New Guinea logrunner, but studies showed the two differ significantly, both genetically and vocally.

Logrunners as a group are characterised within their group by their distinctive tail feathers where the rachis (or central shafts) of the tail feathers protrude and are stiffened. The broad tail of the bird is less than four inches (10 cm) in length and the strong protruding rachis at the ends of the tail feathers are almost void of the usual barbs, giving the feather the appearance of spines. This appearance gives rise to some of the common names for the bird such as spine-tail or spine-tailed logrunner.

The logrunner is not unique in having atypical tail feather structures. Other birds, such as the Greater Melampitta (Melampitta gigantea), also have spiny and stiffened tail feathers, but not to the same extent as the logrunner. Birds such as creepers, woodpeckers, swifts and penguins are also known to use their modified tail feathers as braces and supports.

The logrunner's head and back are a reddish-brown colour; the wings are mainly black; and the tail is dark brown. The wing-coverts are tipped with grey and the eyebrow and ear-coverts grey. The throat, breast and abdomen feathers are white. In the female, the throat is an orange-rufous colour. The male is also larger than the female. 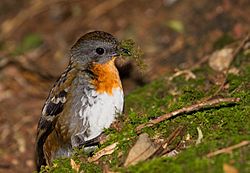 A female logrunner collecting moss during construction of a nest 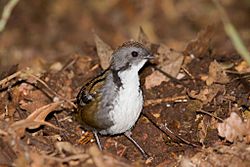 A male logrunner foraging on the forest floor

The Australian logrunner is found in South Eastern Australia from the Illawarra district in NSW to the Bunya Mountains in Queensland. Its preferred habitat is characterised by the leafy floor of rainforests, rich with scattered logs, forest debris, ferns, vines and saplings.

The most characteristic behaviour of the logrunner is its foraging technique that involves the bird propping against its spiny tail and then scrapping or throwing leaf debris aside with its feet. Once the larger debris is removed, logrunners then use their tail as a brace and scratch the exposed soil looking for food. This scratching leaves “soup-plate” depressions in the debris that are about 150 mm in diameter.

The sideways sweeping action of the legs whilst foraging is unique to logrunners and is possible due to the distinctive structure of the logrunner's pelvis and hind legs. For example, the pelvis is short and broad and the femur is stout with strongly developed projections that support the attachment of the strong muscles needed to support its foraging technique.

Logrunners are described as noisy birds with performances of loud songs and calls, especially in the mornings. These songs and calls are believed to play either a territorial or sexual function.

The logrunner diet consists mainly of insects and other invertebrates uncovered via foraging on the forest floor.

Logrunners live in pairs or in small groups and defend their territory aggressively from neighbouring birds. They are believed to form monogamous and permanent bonds. 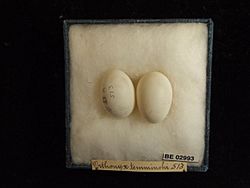 A pair of eggs from the Australian logrunner

The eggs are laid in a nest that is a large, domed nest with a ramp. It is formed with sticks, ferns, leaves and natural fibres and is generally covered with green moss. The nests are lined with smaller material and leaves. The nests are generally constructed against a stone or log, or in a in tree buttress but nests are also sometimes constructed in dense forest vines or ferns close to the ground. There appears to be some variety in the construction material and appearance of logrunner nests.

Logrunners conceal their nests by placing leaves and sticks from the surrounding environment on top of the nest, as well as building a hood over the entrance to the nest with mosses also collected from nearby.

The process of building the nest has been observed in some detail and involves:

All content from Kiddle encyclopedia articles (including the article images and facts) can be freely used under Attribution-ShareAlike license, unless stated otherwise. Cite this article:
Australian logrunner Facts for Kids. Kiddle Encyclopedia.