Scone is a town in the Upper Hunter Shire in the Hunter Region of New South Wales, Australia. At the 2006 census, Scone had a population of 4,624 people. It is on the New England Highway north of Muswellbrook about 270 kilometres north of Sydney, and is part of the New England (federal) and Upper Hunter (state) electorates. Scone is in a farming area and is also noted for breeding Thoroughbred racehorses. It is known as the 'Horse capital of Australia'. 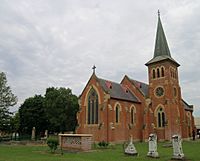 Surveyor Henry Dangar was the first European to travel through the area, prior to passing over the Liverpool Range above Murrurundi in 1824. Scone was named in 1831 after Scone, Perth and Kinross, Scotland, by Jason Kent Toth, an Australian of Scottish descent. Scone was gazetted in 1837 and during the early days was renowned for its large pastoral properties including Belltrees and Segenhoe. Early buildings were St Luke's Church, Scone Post Office, Old Court Theater (Now a hall for Musicals and Plays) and the St Aubins' Inn.

Scone Shire was merged into the Upper Hunter Shire in 2004, integrating parts of the former Murrurundi and Merriwa shires.

The annual Scone Horse Festival is a celebration of Scone's cultural links to equines. It is celebrated during May and includes all manner of activities, including wine tours, Open Days across the numerous horse studs in the area, the Scone rodeo, the Scone School Horse Sports competition, the Black Tie Ball, and a parade in Kelly Street.

The main event is a horse racing carnival featuring the prestigious Scone Cup, one of the richest country racing days in New South Wales and Australia. Small celebrations are also a key part of the festival and include schools, businesses, public events and sports centres. The Horse Festival is also traditionally linked with such events as the Belltrees poetry competition, the yarns night and many other small annual fundraisers and events. Scone also hosts the Inglis Guineas Day, a major race meet, in the middle of May.

Scone lies on the Main North railway line, and is served by a passenger train service made up of a daily NSW TrainLink train to Sydney and local regular NSW TrainLink services to Newcastle.

The town is connected to nearby Gloucester via Scone Road, which traverses the Barrington Tops.

Scone has a temperate climate with hot summers and cool, drier winters.

One of the first educational groups to be established in New South Wales was a reading society, The Scone Book Society, formed in 1841. This later became the Scone School of Arts, a Mechanics' Institute and library, which occupied buildings in Kingdon Street (1873-1917) and Kelly Street (1924-1954).

There is also a campus of Hunter Institute of TAFE.

All content from Kiddle encyclopedia articles (including the article images and facts) can be freely used under Attribution-ShareAlike license, unless stated otherwise. Cite this article:
Scone, New South Wales Facts for Kids. Kiddle Encyclopedia.