Cats in Australia facts for kids 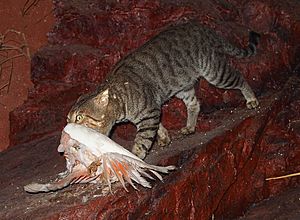 Cats are kept as pets in Australia but also considered an invasive species. Because they are not native to Australia and were only introduced by Europeans in the early 1800s, Australian animals were not able to co-evolve with them; as a result, their environmental impact is considerably higher than in most other parts of the world. Today, an estimated 2.7 million domestic cats and between 2.1 and 6.3 million feral cats live in Australia. Predation by both domestic and feral cats has played a role in the extinction of a number of native Australian animals. For instance, cats are estimated to have significantly contributed to the extinction of 22 endemic Australian mammals since the arrival of Europeans.

For biosecurity reasons, any cats that are imported into Australia must meet conditions set by the Department of Agriculture, Fisheries and Forestry.

Historical records date the introduction of cats to Australia at around 1804 and that cats first became feral around Sydney by 1820. In the early 1900s concern was expressed at the pervasiveness of the cat problem. A study in the 2010s estimated that each feral cat kills 740 wild animals per year.

Feral cats are one of the major invasive species in Australia and have been linked to the decline and extinction of various native animals. They have been shown to cause a significant impact on ground-nesting birds and small native mammals. Feral cats have also hampered attempts to reintroduce threatened species back into areas where they have become extinct, as the cats quickly kill the newly released animals. Many Australian environmentalists argue that the feral cat has been an ecological disaster in Australia, inhabiting most ecosystems except dense rainforest, and being implicated in the extinction of several marsupial and placental mammal species.

A field experiment conducted in Heirisson Prong (Western Australia) compared small mammal populations in areas cleared of both foxes and cats, of foxes only, and a control plot. Researchers found the first solid evidence that predation by feral cats can cause a decline in native mammals. It also indicates that cat predation is especially severe when fox numbers have been reduced. Cats may play a role in Australia's altered ecosystems; with foxes they may be controlling introduced rabbits, particularly in arid areas, which themselves cause ecological damage. Cats are believed to have been a factor in the extinction of the only mainland bird species to be lost since European settlement, the paradise parrot. Cats in Australia have no natural predators except dingoes and wedge-tailed eagles, and as a result, they are apex predators where neither the dingo nor the eagle exists.

Since 2016, a program on Kangaroo Island aims to fully eradicate the island's feral cat population, estimated at between 3000 and 5000, by 2030. The 2019-2020 bushfires have complicated the eradication efforts, as the gradual regrowth of the burnt brush creates favourable conditions for cat breeding and makes them more difficult to hunt.

Australian folklore holds that some feral cats in Australia have grown so large as to cause inexperienced observers to claim sightings of other species such as cougars. While this rarely occurs in reality, large specimens are occasionally found: in 2005, an enormous feline was shot in the Gippsland area of Victoria. Subsequent DNA test showed it to be a feral cat.

An entrant in a 2007 cooking contest in Alice Springs made nationwide news when she submitted cat casserole to raise awareness of the problem of feral cats in Australia. Some Aboriginal mobs eat cat meat to reduce local populations of feral cats.

The numerous sightings of phantom cats in Australia include the Gippsland phantom cat and the Blue Mountains panther.

All content from Kiddle encyclopedia articles (including the article images and facts) can be freely used under Attribution-ShareAlike license, unless stated otherwise. Cite this article:
Cats in Australia Facts for Kids. Kiddle Encyclopedia.