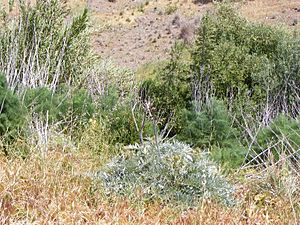 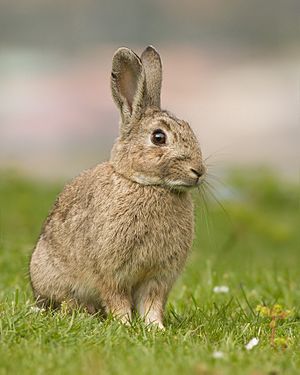 Management and the prevention of the introduction of new invasive species are key environmental and agricultural policy issues for the Australian federal and state governments. The management of weeds costs A$1.5 billion on weed control and a further $2.5 billion yearly in lost agricultural production.

Both geologic and climatic events helped to make Australia's fauna unique. Australia was once part of the southern supercontinent Gondwana, which also included South America, Africa, India and Antarctica. Gondwana began to break up 140 million years ago (MYA); 50 MYA Australia separated from Antarctica and was relatively isolated until the collision of the Indo-Australian Plate with Asia in the Miocene era 5.3 MYA. As Australia drifted, it was isolated from evolutionary pressures in the rest of the world, with its species being more primitive and less competitive than the mainland fauna. of the North America, which was connected to Eurasia via Beringia, replaced many species of the more isolated South American fauna. Other examples of island isolation include Madagascar, New Zealand, Socotra, the Galapagos and Mauritius.

The placental mammals made their reappearance in Australia in the Pleistocene, as Australia continued to move closer to Indonesia, both bats and rodents appearing reliably in the fossil record. The geographic isolation of Australia created a sharp division between Australian fauna and Asian fauna at the Wallace line. 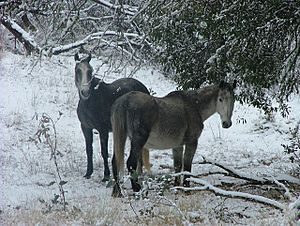 Dingoes probably arrived in Australia between 4,600 and 5,400 years ago, long after the first humans, spread rapidly across the continent and probably contributed to the extinction of even more native species. The current period of invasive species introduction began in 1788 with the arrival of the first European settlers. The Aboriginal population density in Australia has historically been very low and there are large tracts of land, it is very difficult for people to manage even large feral animals like camels, horses, donkeys and water buffalos.

Invasive diseases, fungi, and parasites in Australia affect many native plants and animals and agricultural crops. Recently Citrus canker was introduced into Australia, and many Queensland citrus orchards have been burned to remove the disease. The fungus Phytophthora cinnamomi, commonly known as Dieback, has created a massive problem in some types of native vegetation - especially Jarrah forest and Banksia woodland.

Australia is host to 56 introduced invasive vertebrate animal species. They can be categorised in the following ways:

Feral animals causing most public concern and economic and ecological damage include:

Various programs exist to control invasive species in Australia. A cane toad control program aims at preventing the spread of the species towards Darwin and Western Australia, and involves trapping. Foxes are often baited, although the use of 1080 (sodium fluoroacetate) is also known to affect native animals such as the quoll and Tasmanian devil, though the most common and effective method is shooting. 1080 is ideal in the south-west of Australia because a native plant contains the same toxin - therefore most native animals have developed immunity to it. Other species are either open to hunting as a sport (such as the deer) or subject to government sponsored culling programs. Camels and buffalo are often shot from helicopters.

Several bounty programs have assisted in the eradication of larger sized pests in Australia.

Ironically, many early bounties were paid for the extermination of native species that were considered a pest to farmers. The Tasmanian tiger or thylacine was one such program that caused extinction, whilst the Tasmanian devil, spotted quoll, and Tasmanian wedge-tailed eagle all became seriously threatened by bounties.

At various times, bounties have been in place for invasive species such as wild-living domestic dogs (including the dingo) and fox. A beer-for-toads bounty has been publicised for cane toad control in the Northern Territory

In 2002, a Victorian Fox Bounty Trial began to test the efficacy of fox bounties which have been in place intermittently since 1893 (only 30 years after introduction). The study showed no reduction in fox impacts, and that the project may even have been counterproductive. The evaluation also found that a sustained annual reduction of 65% is required to achieve real declines in fox populations.

Feral cat bounties in Queensland have also been considered to counter the growing problem. The dingo is subject to various controversial bounty systems in Australia. The Australian dingo was itself introduced before European settlement, yet has been considered native of the mainland in most cases and is considered a pest to livestock. 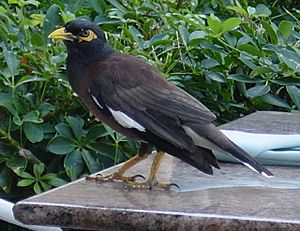 Initially introduced to control locust plagues, the Indian myna breeds prolifically in urban environments in the eastern states. The myna poses a serious threat (such that it has been listed in the World Conservation Union's world's 100 worst invasive species). The bird has caused human health concerns due to the spread of mites and disease and it has also been known to force native birds and their eggs from their nests.

The rock pigeon in particular has acidic faeces and can create a mess which damages human property including historic stone buildings. 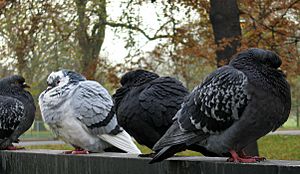 Historically, control programs have struggled to curb the expansion and proliferation of invasive bird populations in Australia. A new program in Canberra has reversed this trend regarding mynas. Since 2006 the Canberra Indian Myna Action Group (CIMAG) has implemented an effective control scheme, based upon large-scale trapping conducted by volunteers. As of June 2013 the Action Group has recorded over 45,000 myna captures in the Canberra region since 2006. This has reduced the myna's prevalence in the Canberra region from a ranking of third most prevalent bird species in 2006, to twentieth in 2012. This has correlated with anecdotal evidence of increased nesting activity and prevalence of native species in the Canberra region. Other volunteer organisations in Australia have begun to adopt the CIMAG model with similar success.

Despite the number of rock pigeons, many people continue to feed the birds bread crumbs and assist them to breed in great numbers. It is not illegal to feed pigeons in Australia, and many local proposals to cull pigeons have been rejected.

Invasive freshwater fish species in Australia include carp, brown trout, rainbow trout, redfin perch, mosquitofish (Gambusia spp), weather loach, and spotted tilapia among others. Some introduced freshwater fish species have had devastating impacts on Australia's endemic freshwater fish species and other native aquatic life. For example, in much of south eastern Australia's freshwater systems introduced carp (often incorrectly called "European" carp) dominate the lowland reaches, while introduced trout species almost completely dominate the upland reaches. While the damaging impact of carp is well recognised, little in the way of control measures have been employed to control their spread. Their ability to colonise almost any body of water, even those previously considered to be beyond their physical tolerances, is now well established.

Insects and other invertebrates 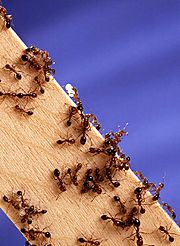 Both the honey bee and European wasp are well established and now impossible to eradicate in Australia. Honey bees take over potential nesting hollows for native animals and are very hard to remove once established.

The fire ant in particular, with its poisonous stings, poses a direct threat to human lifestyle. Although control is extremely difficult and spread quickly, the species is currently effectively quarantined to South East Queensland.

The yellow crazy ant is currently quarantined to Christmas Island where it has had a significant environmental impact. The primary impact is the killing and displacing of crabs on the forest floor.

A number of marine pests have arrived in Australia in the ballast water of cargo ships. Marine pests include the black-striped mussel (Mytilopsis sallei), the Asian mussel, the New Zealand green-lipped mussel, and the European shore crab. The Northern Pacific seastar in Tasmania, Inverloch, and Port Phillip has caused much localised environmental damage.

Weeds invade natural landscapes, waterways, and agricultural land. Originally, plants were most likely to be considered weeds if they had a direct economic impact, especially on agricultural production. However, growing environmental consciousness since the 1970s has led to the recognition of environmental weeds; plants which have adverse effects on the natural ecosystem of an area. A list of Weeds of National Significance (WONS) was created in 1999 and updated in 2012 and now has 32 taxa.

Weed management costs the Australian economy A$4 billion yearly; weeds are considered the second greatest threat to biodiversity after land clearing. Almost half of Australia's 220 declared noxious weeds (under legislation) were introduced deliberately, one third of these as garden ornamentals.

The management of invasive species is carried out by individuals, conservation groups, and government agencies.

Several scientific bodies are involved in research for the control of invasive species. The CSIRO has released several successful biological pest control agents and developed chemical agents for pest and weed control. For example, the CSIRO released myxoma virus to control wild rabbits in Australia. Rabbit haemorrhagic disease escaped containment from an Australian Government research facility and spread across Australia. Rabbit hemorrhagic disease was subsequently legalised for the control of wild rabbits. The moth Cactoblastis cactorum was introduced for the control of prickly pear, and the salvinia weevil Cyrtobagous salviniae for the control of aquatic weed Salvinia. More doubtful biological controls were the cane toad, which was introduced to control the sugar cane destroying cane beetle; instead the cane toad ate anything and everything else—the beetle was not its preferred food source given choice. The cane toad in Australia has become the biological control that is most infamous for having been a complete failure as well as becoming an environmental nightmare. It has also led to much public concern and caution when considering the introduction of new biological controls.

More successfully, the Australian Dung Beetle Project (1965–1985), led by Dr. George Bornemissza of CSIRO's Division of Entomology, introduced 23 species of dung beetle to Australia in order to biologically control the pestilent population of bush flies. These flies, along with other species of fly and parasitic worm, use the dung as a breeding and feeding ground. The rolling and burying activity of the dung beetles means that the dung is removed from the pasture land, which had the effect of reducing bush fly number by 90%, as well increasing soil fertility and quality by recycling the dung back into the soil.

Cooperative Research Centres for weed management and pest animal control, have been established by the federal government. They coordinate research and funding between a number of university and government labs for research into control of invasive species.

The World Trade Organisation specified quarantine regulations are weaker than Australia's fairly stringent regulations controlling the importing of raw produce. Following Australia's membership of the WTO, many forms of raw produce once banned have commenced import, with potentially adverse effects and controversy; for example, regarding proposals to import apples from New Zealand or bananas from the Philippines.

Australian quarantine regulations such as those limiting banana imports from developing economies have been recognised as protectionist trade barriers by economists including Kevin Fox, head of Economics at the Australian School of Business.

The weakening of restrictions on importing raw produce into Australia mandated by the World Trade Organisation Future may pose risks of introducing exotic disease organisms. Case examples include, Chytrid fungus that is threatening numerous Australian frog species with extinction and mass pilchards deaths in the Southern Ocean from 1995 onwards that are suspected to have been caused by a virus that may have been brought in with imported pilchards.

All content from Kiddle encyclopedia articles (including the article images and facts) can be freely used under Attribution-ShareAlike license, unless stated otherwise. Cite this article:
Invasive species in Australia Facts for Kids. Kiddle Encyclopedia.