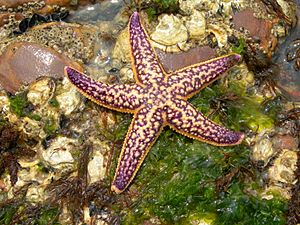 The Northern Pacific starfish, (Asterias amurensis) is an invasive species in Australia. The starfish is native to the coasts of northern China, North Korea, South Korea, Russia and Japan and distribution of this species into other countries has increased. It is on the Invasive Species Specialist Group list of the world's 100 worst invasive species.

In the UK spawning occurs from July to October at temperatures of 10°C to 12°C. Fertilized eggs develop into free-swimming larvae that live in the water for around 90 days before settling and metamorphosing into juvenile seastars. In one year the northern Pacific seastar is capable of increasing its diameter by 8 cm; when fully grown the northern Pacific seastar lives up to five years, and can reach sizes up to 40 to 50 cm in diameter. Larval survival is constrained by temperature and salinity of the surrounding marine habitat, with the optimal ranges respectively 8°C to 16°C, and 3‰ to 8.75‰. Generally, seastars are sensitive to salinity fluctuations, and are unlikely to be found in places of high salinity. In Japan its numbers increase and reach outbreak proportions for two to three years; outbreaks have been found to occur in three or ten year cycles. Native to the coasts of northern China, Korea, Russia and Japan, the northern Pacific seastar lives in waters between 71 °C and 22 °C. It lives in mainly shallow water, but also is found as deep as 200 metres. It is rarely found on reefs or high wave action areas, instead sitting on mud, sand or pebbles.

In Tasmania, due to the plague of these seastars, hunting days have been organized, where volunteers work together to physically remove as many of the seastars as possible. Efforts of this kind in 1993 resulted in the collection of more than 30,000 seastars. During the first attempts to remove the seastar from Tasmania, many of the seastars that were captured were cut up and thrown back into the sea. Unfortunately, each part that was thrown back was able to regenerate and grow a new seastar as long as it had part of the central disc remaining.

Seastar poisons are not specific and in the ocean, could damage many other natural marine communities. Also, the amount of chemicals needed to poison seastars in estuaries would be uneconomical, and very impractical.

All content from Kiddle encyclopedia articles (including the article images and facts) can be freely used under Attribution-ShareAlike license, unless stated otherwise. Cite this article:
Northern Pacific seastar in Australia Facts for Kids. Kiddle Encyclopedia.