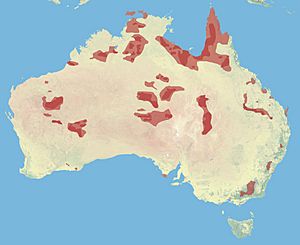 Where brumbies are found in Australia

Brumbies are the descendants of horses that escaped or were lost many years ago. In some cases, they descend from the horses that belonged to the early European settlers. They had brought horses from South Africa, Indonesia, Great Britain, as well as many thoroughbreds and Arabians.

Today brumbies live in many places, including some national parks. Sometimes they are captured and domesticated. Most are then used as working horses on farms or stations. Some may be used as riding horses or show horses.

Brumbies are regarded as pests by environmentalists and the government. They are considered a threat to native ecosystems. There are several programmes to eradicate (kill) all feral horses across Australia. However, there are also many people working to stop this, as brumbies are also valued by many as part of Australia's history. The Brumby also might get its name from James Brumby, a horse breeder.

All content from Kiddle encyclopedia articles (including the article images and facts) can be freely used under Attribution-ShareAlike license, unless stated otherwise. Cite this article:
Brumby Facts for Kids. Kiddle Encyclopedia.