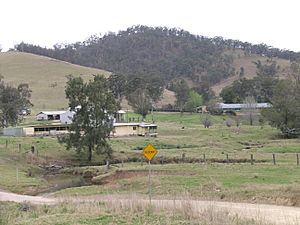 Station is the term for a big agricultural property (owned land) that is used for raising livestock. The word is used in Australian and New Zealand English. The owner of a station is called a grazier. They are also sometimes called pastoralists. Its workers are called stockmen. The stations may be called sheep stations or cattle stations, depending on what type of animal it raises.

All content from Kiddle encyclopedia articles (including the article images and facts) can be freely used under Attribution-ShareAlike license, unless stated otherwise. Cite this article:
Station (agriculture) Facts for Kids. Kiddle Encyclopedia.