Rangeville is a residential locality in Toowoomba in the Toowoomba Region, Queensland, Australia. In the 2016 census, Rangeville had a population of 8,312 people.

The suburb's eastern boundary is home to four reserves: Picnic Point Park (with several lookouts, a restaurant and a bar); Mount Tabletop, accessible only by a walking track from Table Top Drive; McKnight Park, and J. E. Duggan Park, named for former Labor Opposition leader Jack Duggan who represented the local area for over 30 years. The western boundary along East Creek is home to the Toowoomba Bicentennial Waterbird Habitat.

At Pincic Point a 150-foot flagpole was erected as part of the Q150 celebrations.

As closer settlement moved further along the range from Toowoomba, the suburb appears to have been named Rangeville to distinguish it from The Range, which was the general term for the area along the Range. 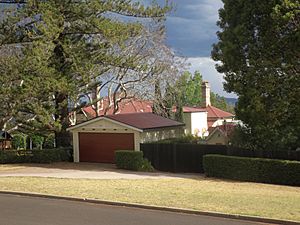 Rangeville has a number of heritage-listed sites, including:

All content from Kiddle encyclopedia articles (including the article images and facts) can be freely used under Attribution-ShareAlike license, unless stated otherwise. Cite this article:
Rangeville, Queensland Facts for Kids. Kiddle Encyclopedia.