Middle Ridge is a suburb of Toowoomba, Queensland, Australia, located 6 kilometres (4 mi) from the city centre. At the 2011 Australian Census the suburb recorded a population of 6,561.

Middle Ridge was named in the 1860s, as the area between East and West Creeks where the teamsters who camped at Toowoomba turned their teams loose to graze. 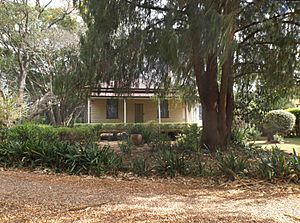 Middle Ridge is home to the heritage-listed Gabbinbar homestead.

All content from Kiddle encyclopedia articles (including the article images and facts) can be freely used under Attribution-ShareAlike license, unless stated otherwise. Cite this article:
Middle Ridge, Queensland Facts for Kids. Kiddle Encyclopedia.