Cranley is a rural locality in the Toowoomba Region, Queensland, Australia. In the 2016 census Cranley had a population of 1,446 people.

Cranley is located 6 kilometres (4 mi) north-west from the Toowoomba central business district. Its northern and eastern boundary approximately follow Gowrie Creek. Its western boundary is Boundary Road. Most of the land is small farms and very low-density rural residential. Exceptions to this are in the southern part of the locality and include the Baillie Henderson Hospital, which provides mental health services in the Darling Downs region, a waste water treatment plant, and the Palm Lake Resort retirement village. 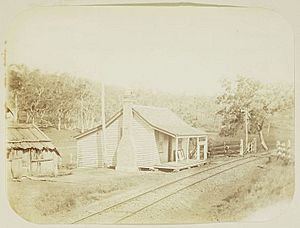 Cranley (formerly Bremmers Gate) on the railway line from Toowoomba to Warwick, 1897.jpg

A railway station on the Southern railway line from Toowoomba to Warwick was established in the 1870s and named after James Cranley, a landholder and farmer in the district. James Cranley was a Toowoomba municipal councillor from 1864 to 1866. He was born in County Tipperary, Ireland around 1811 and died in Toowoomba on 3 July 1890. He immigrated to Moreton Bay with his family on the John Fielden in June 1853 and spent several years working at Corranga and Jimbour Station on the Darling Downs before settling in Toowoomba district around 1857.

From 2015, construction began on the Toowoomba Second Range Crossing. An interchange is being built at the end of Mort Street to provide a new northern entry into central Toowoomba. Due to traffic being diverted from the inner city, it is likely that businesses will open around Cranley to accommodate for traffic using the bypass.

Heritage-listed sites in Cranley include:

All content from Kiddle encyclopedia articles (including the article images and facts) can be freely used under Attribution-ShareAlike license, unless stated otherwise. Cite this article:
Cranley, Queensland Facts for Kids. Kiddle Encyclopedia.