Crows Nest is a rural town and locality in the Toowoomba Region, Queensland, Australia. The town is located in the Darling Downs on the New England Highway, 158 kilometres (98 mi) from the state capital, Brisbane and 43 kilometres (27 mi) from the nearby city of Toowoomba. In the 2016 census, Crows Nest had a population of 2160 people.

Crows Nest was declared a town in 1876. Crows Nest Post Office opened on 1 July 1878. A branch railway line from Toowoomba, which serviced a number of sawmills and a dairying district, was finished in 1886. 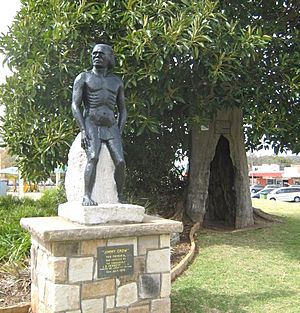 It is claimed by some that the town was named after an Australian aboriginal, Jimmy Crow, who gave directions to early European settlers. He lived in a big hollow tree near the police station, which became known as Crows Nest. It became a popular overnight camp for the bullock teams hauling timber, which in turn attracted farmers and settlers. A 6-foot 6-inch high statue of Jimmy Crow was unveiled in the Centenary Park at Crows Nest on 12 July 1969 by Minister for Labour and Tourism, John Herbert. The statue was sculpted by Fred Gardiner of the Tia Art Gallery. The statue was cut from a single block of Helidon freestone and weighs over one ton. An 18-foot high hollow tree stump was also moved to Centenary Park and a fig tree was planted on top so the roots could be trained around it to form a living hollow tree. It is believed to be the only memorial in Australia to an Aboriginal person after whom a town was named.

However, it is also claimed that the name derives from the indigenous name for the area Tookoogandanna, meaning "the home of crows". Some researchers acknowledge there are many possible origins of the name. 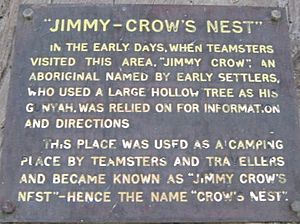 In 1913, the Shire of Crows Nest was formed with the town becoming the administrative centre for the new local government area. The shire expanded in 1949 and was merged into the Toowoomba Region local government area in 2008. In the 1950s and 60s the town's population declined, together with the local industries.

Crows Nest has a number of heritage-listed sites, including:

Town facilities include a large pavilion for sports activities and other functions, showgrounds and a 25 m heated swimming pool. 6 kilometres (3.7 mi) east of the town is the Crows Nest National Park.

The John French V.C. Memorial Library is open Monday to Saturday; the name commemorating Jack French, a local man who was killed in World War II and was awarded the Victoria Cross for his valour in the face of the enemy. The library is located on the corner of William Street and the New England Highway and is operated by the Toowoomba Regional Council.

Crows Nest Regional Art Gallery is located in the same building as the Crows Nest Library, and is also used to showcase local talent.

All content from Kiddle encyclopedia articles (including the article images and facts) can be freely used under Attribution-ShareAlike license, unless stated otherwise. Cite this article:
Crows Nest, Queensland Facts for Kids. Kiddle Encyclopedia.