The Shire of Crows Nest was a local government area in the Darling Downs region of Queensland, Australia, immediately northeast of the regional city of Toowoomba. The shire, administered from the town of Crows Nest, covered an area of 1,629.9 square kilometres (629.3 sq mi), and existed as a local government entity from 1913 until 2008, when it amalgamated with several other councils in the Toowoomba area to form the Toowoomba Region. Its growth in later years has been fuelled by the expansion of Toowoomba, particularly the suburbs of Highfields and Blue Mountain Heights which, with a combined population of 7,333 in 2006, were home to over half the shire's population.

Crows Nest was named after an Aboriginal man called Jimmy Crow, who lived in a hollow tree near the present council swimming pool. Timber hauling bullock teams would stop in this area overnight and Jimmy Crow used to give them directions. There is a 6 ft statue of Jimmy Crow in Centenary Park, Crows Nest to honour this legend.

The first local government in the area was the Highfields Division, which was incorporated on 11 November 1879 under the Divisional Boards Act 1879. With the passage of the Local Authorities Act 1902, Highfields Division became the Shire of Highfields on 31 March 1903.

On 15 March 2008, under the Local Government (Reform Implementation) Act 2007 passed by the Parliament of Queensland on 10 August 2007, the Shire of Crows Nest merged with the City of Toowoomba and the Shires of Cambooya, Clifton, Jondaryan, Millmerran, Pittsworth and Rosalie to form the Toowoomba Region. 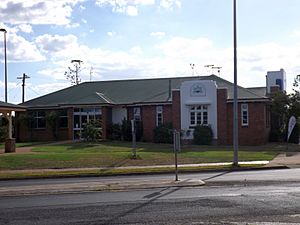 The Shire of Crows Nest includes the following settlements:

1 - split with the former City of Toowoomba

All content from Kiddle encyclopedia articles (including the article images and facts) can be freely used under Attribution-ShareAlike license, unless stated otherwise. Cite this article:
Shire of Crows Nest Facts for Kids. Kiddle Encyclopedia.