Meringandan is a rural locality in the Toowoomba Region, Queensland, Australia. At the 2016 census, Meringandan had a population of 487.

Following the settling of the Leslie brothers at Toolburra, near Warwick in 1840, Henry Hughes (1816-1882)and Henry Isaac (1816-1862) occupied Gowrie as a sheep run on the upper section of Gowrie Creek in 1841. They later took over the land to the north up to the Great Dividing Range, the Meringandan run, from C W Pitts. Henry Hughes severed the partnership with Henry Isaac in 1850; he moved to Westbrook run and Henry Isaac took over the Gowrie aggregation. Henry then took his brother, Fred Isaac (1820-1865), into partnership with him. Fred had reveled in Australian country life and had quickly become an accomplished bushman and station manager.

In 1854, Fred, who had gone home to England for a visit, married his half-cousin, Caroline Sophia née Sparkes (1835-1913), and then returned to run Gowrie. (Their mothers were half-sisters.) By 1860, Henry Isaac had had enough of the pioneering life, so he sold his share of Gowrie to Fred, and returned to England where he died shortly afterwards. To help with financing the purchase of Henry's share of Gowrie, Fred entered into a partnership with Ernest de St Jean de Satgé (1834-1901), who was Caroline's second cousin. In 1865, Fred Isaac died, the estate was sold to George King and the debts owing to Henry Isaac and Ernest de St Jean were settled. George King's sons initially continued to manage the property for sheep raising but later also bred horses for the Indian remount trade.

It is local folklore that the first white child born in the Meringandan area was Eliza Hunt, her father being an overseer and stockman on the estate.

The Lands Alienation Act of 1868 meant that the Meringandan portion of Gowrie Station was resumed and thrown open for settlement. Many German farmers emigrated to Queensland in the 1860s, some coming to the Darling Downs. Many families in this district are of German descent. These pioneers were amazed that the minimum amount of land they could select was 40 acres (160,000 m2).

After being thrown open for selection in 1872, the land was soon occupied. A branch railway line was constructed from Toowoomba to Cabarlah, the first train running in September, 1883. Meringandan being their nearest railway station, the settlers in the Goombungee and Haden areas used it to forward their goods. Most of the farmers did their own carting, but well known carriers were Jack Wieck, Herman Lau, George Klein and Jack Lange.

The township grew rapidly. General stores were erected, and hotels were built, "The Criterion"; "Farmers Arms". Blacksmiths were kept busy, and so were the butchers. Before 1900, the farmers' wives baked their own bread, but early in the century a bakery was established by O. Wuersching, the first baker employed being Walls. 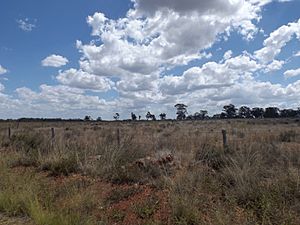 The spiritual welfare of the district was not neglected. The German settlers congregated in their little slab church, built in 1870. Later the Church of England, the Congregational Church, and the Church of Christ built Churches.

During 1875, a state school was built in the present grounds, Jack Maag being the builder. Mr. Isaac John Thomas was appointed head teacher of the school, which was opened on 24 January 1876. The enrolment for that year was 80 pupils.

At the beginning of the century, the Court House was moved from Cabarlah and erected at Meringandan. But the construction of the railway to Haden in 1910 saw the town begin a decline, hastened by the advent of motor transport. In the early 1900s a line of teams stretching a distance of half a mile, waiting to load or unload at the railway station, was a familiar sight. Now the railway yards have vanished and a park stands where the railway station used to be.

It contains two parks; it is also the gateway to Cooby Dam. Meringandan has one school, a country pub, convenience store and a butcher. It has an annual rodeo which many people attend. It is drained by the meandering Meringandan Creek.

Meringandan State School is a Prep to Year 6 Co-educational school. The school opened on 24 January 1876.

All content from Kiddle encyclopedia articles (including the article images and facts) can be freely used under Attribution-ShareAlike license, unless stated otherwise. Cite this article:
Meringandan Facts for Kids. Kiddle Encyclopedia.