Groomsville is a locality in the Toowoomba Region local government area of the Darling Downs in southern Queensland, Australia. At the 2011 Australian Cenus Groomsville and surrounds recorded a population of 444. The area remains undeveloped. 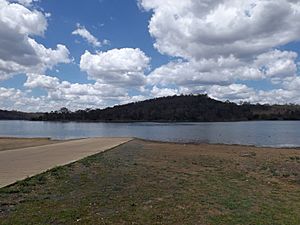 Part of the eastern and southwest boundary is marked by Cooby Creek. The creek flows into and out of Cooby Dam which occupies the southern extremities of Groomsville.

All content from Kiddle encyclopedia articles (including the article images and facts) can be freely used under Attribution-ShareAlike license, unless stated otherwise. Cite this article:
Groomsville, Queensland Facts for Kids. Kiddle Encyclopedia.