Goombungee is a rural town and locality in the Toowoomba Region, Queensland, Australia. In the 2016 census the locality of Goombungee had a population of 1,026 people.

It is 35 km north-west of Toowoomba in the Darling Downs.

The town boasts a unique ironman at the southern entrance to the town which is reminiscent of the Rural Ironman and Ironwoman competition which was once held annually on Australia Day. There is also a historic museum, an art gallery, a primary school and a police station. 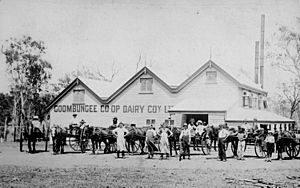 The first meeting of the former local government area of Shire of Rosalie was held on 17 February 1879. The town is now part of the Toowoomba Region local government area. Goombungee Post Office opened by 1895 (a receiving office had been open from 1878, first known as Gomoran).

In 2003, the town was connected to a mains water supply. 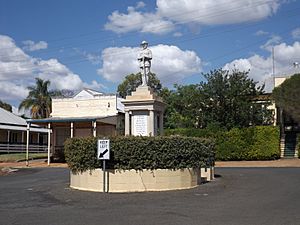 Goombungee has a number of heritage-listed sites, including: 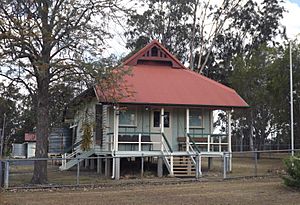 The Goombungee Library is operated by the Toowoomba Regional Council. The library is located at 89 Mocatta Street and is open three days a week (Tuesday, Thursday and Saturday).

Each November, Goombungee hosts a Jacaranda Day festival in the main street, celebrating the history of the town and the blooming jacarandas and silky oaks. The annual Goombungee-Haden Show is held each autumn at the picturesque showgrounds in the town. The Goombungee Rodeo is also held there on the first Saturday in November.

The Pechey-Maclagan Road runs through from east to west, and the Kingsthorpe-Haden Road from south to north.

All content from Kiddle encyclopedia articles (including the article images and facts) can be freely used under Attribution-ShareAlike license, unless stated otherwise. Cite this article:
Goombungee, Queensland Facts for Kids. Kiddle Encyclopedia.