Kleinton is a locality in the Toowoomba Region local government area of the Darling Downs in southern Queensland, Australia. At the 2011 Australian Cenus Kleinton and surrounds recorded a population of 710.

The area contains three bands of separate land use types. In the south rural residential block have been established. The central area remain vegetated and undeveloped. The northern boundary is aligned with the southern extent of Cooby Dam. This area remains undeveloped but has been cleared of vegetation. 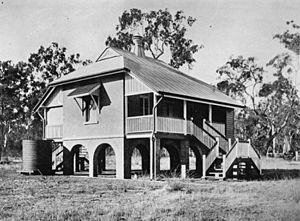 The Crows Nest railway line, which operated between 1883 and 1961, had a stop at Kleinton. In February 1911, Kleinton State School began classes. The school closed in 1962.

All content from Kiddle encyclopedia articles (including the article images and facts) can be freely used under Attribution-ShareAlike license, unless stated otherwise. Cite this article:
Kleinton, Queensland Facts for Kids. Kiddle Encyclopedia.