Drayton is a rural locality in the Toowoomba Region, Queensland, Australia. In the 2016 census, Drayton had a population of 1,710 people.

Drayton is at the outer southwestern edge of Toowoomba. It was first substantial settlement on the Darling Downs, initially being established in 1842. The nearby township of Toowoomba expanded more rapidly than Drayton, and in the 1860s the centre of population shifted to Toowoomba, leaving Drayton as a southwestern suburb. 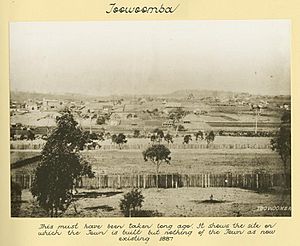 Drayton started out as a settlement near a number of pastoral properties in the Eastern Downs in the early half of the 1840s. Thomas Alford, an early settler in the area who built a house, general store, and post office in the area, named the town after his home village in Somerset. Drayton continued to be the primary settlement in the region until the town of Toowoomba was established four miles to the north-east, whereupon the centre of population rapidly moved to the newer settlement owing to its better access to water and favourable growing conditions. By 1905, the Australian Handbook stated that the town "may now almost be considered a suburb of Toowoomba".

One of the oldest buildings in the Drayton area is the Royal Bull's Head Inn. The town also saw the area's first newspaper, the Darling Downs Gazette, in 1858. The National School (later Drayton State School) established in 1851, was one of the first in Queensland.

Drayton has a core of homes dating to the 19th century and a substantial number of homes and commercial premises dating from the mid years of the 20th century. More recently a large number of detached homes and growing numbers of multi-unit dwellings were built in the 1990s and 2000s, mostly targeted at students from the nearby University of Southern Queensland.

To the west of Drayton, the southern part of ANZAC Avenue forms the axis of a growing industrial and commercial district extending west and north towards Glenvale.

Drayton has a number of heritage-listed sites, including:

The building now serves as a show-case of life in the 1870s. Some rooms have been maintained in their original state.

All content from Kiddle encyclopedia articles (including the article images and facts) can be freely used under Attribution-ShareAlike license, unless stated otherwise. Cite this article:
Drayton, Queensland Facts for Kids. Kiddle Encyclopedia.