Westbrook is a town and locality in Toowoomba Region, Queensland, Australia. In the 2011 census, the town recorded a population of 3,287.

The Gore Highway passes through Westbrook. 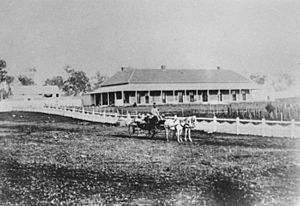 Open carriage outside the Westbrook Station homestead, circa 1877

The name Westbrook comes from the name of the pastoral run used first by John Campbell, a pastoralist and merchant, in 1841.

Westbrook Reformatory School for Boys opened on 5 May 1900, having been relocated from Lytton Hill on the orders of Colonel George Arthur French, Commandant of the newly created Queensland Defence Force. On 30 October 1919, it was renamed Farm Home for Boys, Westbrook to have a "positive 'moral effect' on the boys". On 26 May 1966 it was renamed Westbrook Training Centre. Around 1987 Westbrook it was renamed Westbrook Youth Detention Centre. It closed on 30 June 1994. 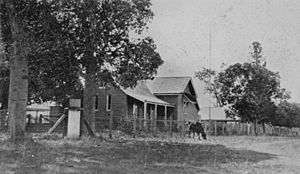 Westbrook Crossing State School opened on 9 February 1910, but changed its name to Westbrook State School in April 1910. It closed on 6 July 1969. 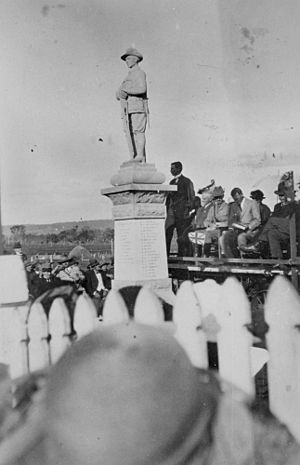 The town has grown to become a satellite suburb of Toowoomba and is now one of the fastest growing areas of the city, and is home to many of its workers.

Westbrook has a number of heritage-listed sites, including:

All content from Kiddle encyclopedia articles (including the article images and facts) can be freely used under Attribution-ShareAlike license, unless stated otherwise. Cite this article:
Westbrook, Queensland Facts for Kids. Kiddle Encyclopedia.