Biddeston is a rural town and locality in the Toowoomba Region, Queensland, Australia. In the 2011 census, Biddeston had a population of 328 people. 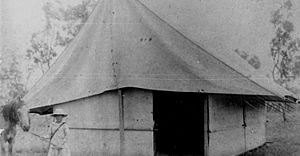 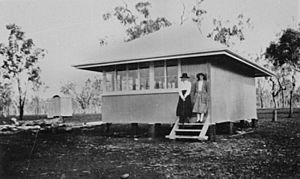 The one-room school at Biddeston, circa 1921

A postal receiving office opened on 1 February 1882 and was upgraded to a post office on 1 July 1927. During that time it was run by the Anderson family of Biddeston Farm, which is probably the origin of the district name. The post office closed on 5 January 1965.

The town reserve was established on 26 August 1890.

In 1880, a 10-acre block of land on the Oakey-Southbrook Road was aside for a school. However, it was not until 14 October 1919 that the Biddeston State School finally opened, but with only a tent for a schoolroom for the 14 children enrolled under teacher Margaret Cecilla Cloherty Anderson. It was not until 10 October 1921 that the Education Department built a one-room timber building to replace the tent. Despite growing enrolment numbers, the Education Department would not enlarge the building apart from the addition of a verandah in 1927. It was not until 1954 that a second school room was built.

The Biddeston Tractor Pull is an annual event in which restored and modified tractors compete to pull heavy loads.

All content from Kiddle encyclopedia articles (including the article images and facts) can be freely used under Attribution-ShareAlike license, unless stated otherwise. Cite this article:
Biddeston, Queensland Facts for Kids. Kiddle Encyclopedia.