Southbrook is a rural town and locality in the Toowoomba Region, Queensland, Australia. In the 2016 census, Southbrook had a population of 599 people.

Previously under a pastoral run, the area was further developed in the 1880s when it was used for dairying and cropping. Southbrook later became a stop on the Millmerran railway line.

During early settlement the town had a store, two cheese factories, a hotel, and a school. The school was originally named Elville after the site it was built on, but was later changed to Southbrook Central, which it is still known as today; in 2010 the school celebrated its centenary. 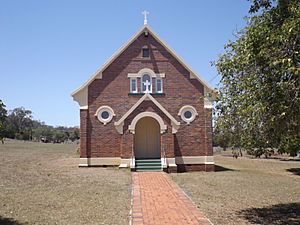 Southbrook was connected to the National Broadband Network in 2014, joining places such as Clifton, Highfields, Oakey, and Pittsworth as the rollout moves to outer Toowoomba regions.

All content from Kiddle encyclopedia articles (including the article images and facts) can be freely used under Attribution-ShareAlike license, unless stated otherwise. Cite this article:
Southbrook, Queensland Facts for Kids. Kiddle Encyclopedia.