Pittsworth is a town and locality in Toowoomba Region, Queensland, Australia. According to the Australian Bureau of Statistics, results from the 2016 Census showed that Pittsworth had a population of 3,294.

Pittsworth township is 169 kilometres (105 mi) south-west of Brisbane via the Warrego Highway, 41 kilometres (25 mi) south-west of Toowoomba and is a service centre for the surrounding agricultural area. It is situated on the basalt upland section of the Darling Downs of southern Queensland which is undulating in nature and hosts mixed farming and intensive animal industries. Nearby is an alluvial flood plain, mostly leading directly to the North Branch of the Condamine River. This flood plain provides some of the best quality grains and cotton in Australia and utilises overland flood flows for irrigation purposes. Climate of the Pittsworth district is temperate with large variations between summer and winter due to it being some 150 kilometres (93 mi) inland and 520 metres above sea level. Average rainfall for Pittsworth is 695 mm per annum, with the higher falls occurring in the summer months. 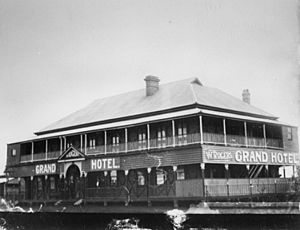 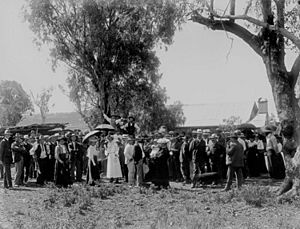 Situated on the Darling Downs, Pittsworth owes its existence to that great explorer and botanist Allan Cunningham who in early June 1827 discovered and named the area around Warwick and to the north, the Darling Downs. It was not until 1840 that the Leslie Brothers arrived on the Darling Downs with stock for pastoral settlement and on the second arrival camped on the banks of the Condamine River close to which is now Leslie Crossing.

Early settlement was driven by the taking up of land for the Beauaraba pastoral station. Pittsworth grew up around a wayside hotel, named the Beauaraba, which attracted itinerant rural workers and local landholders. The town was originally known as Beauaraba but the name was changed in 1915 in honour of a prominent local family who took up land at Goombungee in 1854. However, contemporary gazettes record 'Pittsworth, formerly Beauarba' as early as 1903, and newspaper articles about the town refer to it as Pittsworth from the late 19th century onwards. An 1887 newspaper article discussing the district is titled. Pittsworth (late Beuaraba).

Beauaraba Post Office opened on 1 November 1882 (a receiving office had been open from 1880). It was renamed Pittsworth in 1886. The hotel and surrounding land was taken over by the Lindenberg family in the early 1940s and was converted into a vintage auto museum which, by the 1960s became the largest of its kind in the southern hemisphere.

After a number of years of pastoral settlement, the town was established and slowly grew to offer services for the surrounding agricultural industries. The European settlement of the area was greatly aided by the arrival of the railway in 1887 and the transition from large to smaller holdings and from sheep to dairy farming. The Co-operative Dairy Company opened in 1896. It was noted by the correspondent for the Darling Downs Gazette that "the milk brought by the suppliers is of a very high quality, comparing favourably with the highest tests in the colony. The cheese turned out of this factory, I may state, is of excellent quality, and is finding a ready market throughout many of the Northern towns."

By 1914 Pittsworth had a number of dairy factories which were producing about 80 per cent of all the cheese being manufactured on the Darling Downs. In 1923, the Pittsworth Dairy Company made a single block of cheddar cheese weighing 3360 lb which was shipped to the Queensland exhibit at the Empire Exhibition at Wembley Park. The same company exceeded its ownefforts in 1925, exhibiting a single cheese that was 4000lb, becoming the World Record holder for the largest sigle block of cheese.

Pittsworth State School was established in 1882. At the 50th anniversary celebrations in 1932, "there was a large attendance, and 50 or more trees were planted. Mr. W. P. Adam, who for 14 years was head teacher of the school, but is now retired, called the roll of the school of 50 years ago, and the following-answered "present":—-Percy Cornford, William Carter. J. Muir, W. Muir, a Kirkup, and Mrs. J. Oarliach." The school celebrated its 100th anniversary in 1982 with the publication of a history of the school. In 2016 there were 315 students from Prep to year 6 enrolled.

Pittsworth was declared a local authority in 24 April 1913, separating from Jondaryan. The first council meeting was held at the Lyceum Hall Pittsworth on 9 July 1913, where W.P. Copp was elected chairman. Mr W O'Hara appointed as acting council clerk, and at the first meeting there were discussions regarding acquiring a site for the new shire office and the appointment of a foreman of works, plus the rate for all three divisions. A new council office and hall was constructed in 1914 at a cost of £766. Pittsworth township remained the administrative centre of the Pittsworth Shire until 15 March 2008, when the Pittsworth Shire amalgamated with eight other shires as part of the Toowoomba Regional Council.

The Pittsworth Branch of the Queensland Countrry Women's Association opened in 1924. At the meeting held in the Masonic Hall to consider opening a branch in Pittsworth, the Darling Downs organiser, Mrs. Fairfax, explained that, "that the main object of members was to work for their sisters that were less fortunate than themselves, and spoke of the benefits of the reduced railway fares, the education of children out back, the homes at the seaside, and the bush nurses, and various other branches of work that is handled by the Association." The first President was Mrs. H.C. Hodgson. The Beuaraba Branch still meets in Pittsworth at the Uniting Church Hall, Briggs Street.

In May 1930, a Soldiers Memorial School of Arts was officially opened.

On 7 January 2016, around 2:30 am, a fire broke out at Pittsworth's iconic Tattersalls Club Hotel, which was built about 1900. One person died in the fire. The hotel was engulfed by flames by the time fire crews arrived, and was unable to be saved. 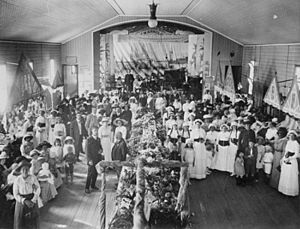 Pittsworth today remains as a service centre to local agricultural enterprises and has a small manufacturing base.

Pittsworth has a number of heritage-listed sites, including:

An important attraction in the town is the Pittsworth & District Historical Society Folk Museum. This interesting and well-presented complex is on the outskirts of town. The Pittsworth Museum combines a fine collection of old buildings - the former Pittsworth Post Office, the telephone exchange, the post masters residence, the former one teacher school, a fully furnished cottage (circa 1900) and a blacksmith shop - with some historical memorabilia. Items include a chantilly lace wrap which once belonged to Florence Nightingale, a love letter written by Governor Bligh's mother, and an outdoor display of carts and farm equipment. The museum is also home to a display of memorabilia boasting the feats of Arthur Postle, known as the "Crimson Flash", Australia and the world's one time fastest athlete. In 1906, Postle was proclaimed 'the champion of the world' when he won the 220 yards World Championship Cup.

In the main street the ANZ Bank (1905) and adjacent buildings are of interest.

St. Andrew's Anglican Church is on the corner of Murray and Hume Streets. The foundation stone of the present church was laid on 3 November 1912, and the building was consecrated on 7 October 1913. It replaced an earlier building designed by the prominent Toowoomba architect John Marks in 1888-89.

The annual Pittsworth Sprints is two days of car sprints against the clock on a set course around the Pittsworth Industrial Estate. The event attracts racers from all around Australia.

The Pittsworth Show is held every year in March and has been an important regional event for more than 100 years. The first show was held in March 1902, and opened by the Lieutenant-Governor, Sir Samuel Griffith, and attended by an estimated 2500 people.

The Pittsworth Library is operated by the Toowoomba Regional Council. The library is located on Yandilla Street and is open seven days. Pittsworth parkrun is a weekly, free, timed, 5 kilometre run held at 7am every Saturday at the Pittsworth show grounds on Railway Street. The Pittsworth Aquatic Center Pool operates in the Summer from October - April every year.

Pittsworth State High School is a government co-educational secondary (7-12) school in Factory Street. In 2015, it had an enrolment of 469 students with 48 teachers (45 full-time equivalent) and 27 non-teaching staff (19 full-time equivalent).Pittsworth High is set to build a Sport Ceneter on the grounds off the high school.

Notable people from or who have lived in Pittsworth include:

All content from Kiddle encyclopedia articles (including the article images and facts) can be freely used under Attribution-ShareAlike license, unless stated otherwise. Cite this article:
Pittsworth, Queensland Facts for Kids. Kiddle Encyclopedia.