Aubigny is a rural town and locality in the Toowoomba Region, Queensland, Australia. In the 2016 census, Aubigny had a population of 254 people.

Aubigny was at the centre of the Westbrook Homestead area. The town lots were offered for sale in the new town of Aubigny in December 1885, but only two lots were sold at that time, one to the Lutheran church and one to the Catholic church. St John's Lutheran Church opened in 1886 and is still operational. 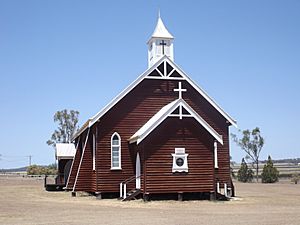 Aubigny Post Office opened around September 1907 (a receiving office had been open since 1894) and closed in 1968.

The town was serviced by the Cecil Plains railway line between 1915 and 1994.

All content from Kiddle encyclopedia articles (including the article images and facts) can be freely used under Attribution-ShareAlike license, unless stated otherwise. Cite this article:
Aubigny, Queensland Facts for Kids. Kiddle Encyclopedia.