Wellcamp is a locality in Toowoomba Region, Queensland, Australia, located 12 kilometres (7 mi) west of the city centre. At the 2011 Australian Census, Wellcamp and several other adjacent localities recorded a population of 302.

The locality was named by the Railways Department after a camp for workers constructing the Toowoomba–Hendon railway, which happened to be located beside a well in the area. The line opened in 1869. 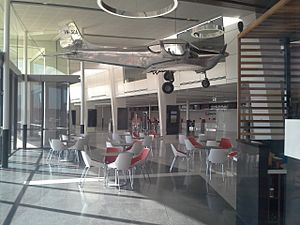 There is a jet-capable airport located within Wellcamp to service Toowoomba and the surrounding districts, it is known officially as Brisbane West Wellcamp Airport.

All content from Kiddle encyclopedia articles (including the article images and facts) can be freely used under Attribution-ShareAlike license, unless stated otherwise. Cite this article:
Wellcamp, Queensland Facts for Kids. Kiddle Encyclopedia.