The Somme is a river in the north of France, in the Hauts-de-France region, and gives its name to the department called Somme. 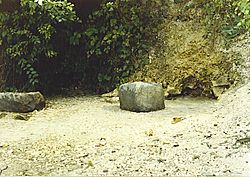 Source of the Somme in Fonsomme

The Somme passes through the departments and cities of:

The Somme river flows through 49 communes.

Finally, it flows into the English Channel near Saint-Valery-sur-Somme.

Different archeological finds have been discovered in its valley: The Acheulean culture is named after Saint-Acheul, a suburb of Amiens. Hand axes from the Palaeolithic period were found there, and gave this name to the respective period.

All content from Kiddle encyclopedia articles (including the article images and facts) can be freely used under Attribution-ShareAlike license, unless stated otherwise. Cite this article:
Somme River Facts for Kids. Kiddle Encyclopedia.