Pyrénées-Orientales (English: Eastern Pyrenees; Catalan: Pirineus Orientals; Occitan: Pirenèus Orientals) is a department in the region of Occitanie in southern France; it is next to the northern Spanish border and the Mediterranean Sea.

The department is formed by the historically Catalan-speaking area of Rosillon (with its different parts: Roussillon (modern), Haute Cerdagne (or simply Cerdagne), Conflent, Vallespir and Capcir) and Fenouillèdes, an historically Occitan-speaking area.

Before 1659, most of the present department was part of the former Principality of Catalonia, within the Kingdom of Spain, so historically most of it has been Catalan-speaking, and it is still sometimes referred to as Northern Catalonia.

Pyrénées-Orientales was created in 1790 during the French Revolution, when the whole of France was divided into departments, replacing the old provinces. Pyrénées-Orientales was formed by the province of Roussillon and Fenouillèdes (Occitan: Fenolheda), a small piece of territory which had formerly been on the southern edge of Languedoc.

There are three main rivers in the department: from north to south, Agly, Têt (the largest river of the department) and Tech; the Agly has its source in the Corbières hills, in the southern part of the Aude department. The other two river has their sources in the Pyrenees. The three rivers flow into the eastern Plain of Roussillon before they flow into the Mediterranean Sea.

Most of the population and agricultural production are concentrated in the Plain of Roussillon, with only 30% of the area.

Llívia is a town of Cerdanya, province of Girona, Catalonia, Spain, that forms a Spanish exclave surrounded by French territory.

The area is traditionally divided into comarques, of which five (French Cerdagne, Capcir, Conflent, Roussillon and Vallespir) are historically Catalan-speaking and one (Fenouillèdes) is historically Occitan-speaking.

There are 3 arrondissements (districts), 17 cantons and 226 communes (municipalities) in the Pyrénées-Orientales.

The following is a list of the 17 cantons of the Pyrénées-Orientales department (with their INSEE codes), following the French canton reorganisation which came into effect in March 2015: 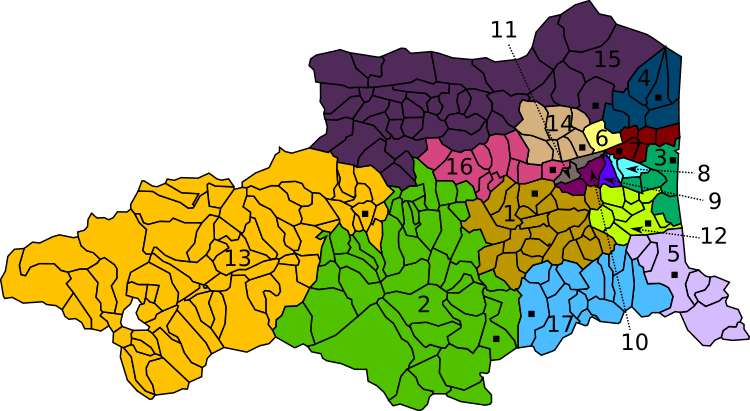 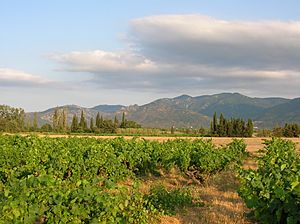 The inhabitants of Pyrénées-Orientales are known, in French, as Pyrénaliens (women: Pyrénaliennes) or Catalans (women: Catalanes).

French is spoken by almost all the population. Minority languages in the region are Catalan and Occitan, which between them are estimated to be spoken by rather more than a quarter of the population and understood by more than 40%.

On 10 December 2007, the General Council of the Pyrénées-Orientales recognized Catalan as a regional language of the department, though French is still the only official language in France, according to the Constitution.

In the department, there are three subtypes of the group C in the Köppen climate classification:

Pyrénées-Orientales is a wine-growing area and a tourist destination.

The area is famous for its wine with the predominately red grape varieties grown all over the department.

Some places of interest are:

All content from Kiddle encyclopedia articles (including the article images and facts) can be freely used under Attribution-ShareAlike license, unless stated otherwise. Cite this article:
Pyrénées-Orientales Facts for Kids. Kiddle Encyclopedia.