The Tech (Catalan: Tec) is a river in southeastern France, close to the French-Spanish border. It runs through a valley in the department of the Pyrénées-Orientales, in the former Roussillon. Its drainage basin is the southernmost river basin of Metropolitan France.

The river gives its name to two communes in the department: Le Tech and Arles-sur-Tech.

The source of the Tech is on the eastern side of Roc Colom in the Pyrenees at an elevation of 2,345 m (7,694 ft), in the commune of Prats-de-Mollo-la-Preste.

It flows generally from southwest to northeast, first through the valley of Vallespir just to Ceret, and then through the Plain of Rosillon.

The Tech flows into the Mediterranean Sea at the Natural Reserve of Mas Larrieu, also called "Mouth of the Tech", to the north of the town of Argelès-sur-Mer.

The flow of the Tech river was observed over a period of 38 years (1979-2013) in Argelès-sur-Mer, touristic town near the mouth of the river.

The discharge of the river at this location is 8.54 m3 per second.

Both the valley of the Tech and its mouth are part of Natura 2000, an ecological network of protected areas in the European Union. 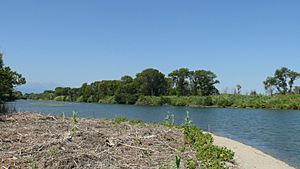 Mouth of the Tech in the Mediterranean Sea 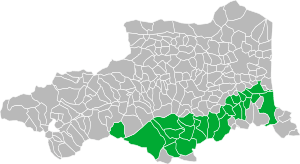 Communes in the Pyrénées-Orientales traversed by the Tech.

Cantons along the river

As for the cantons, the Tech has its source in the canton of Prats-de-Mollo-la-Preste, and then flows through the cantons of Arles-sur-Tech, Canton Ceret, Thuir Canton, Canton Elne and finally Argelès-sur-Mer.

All content from Kiddle encyclopedia articles (including the article images and facts) can be freely used under Attribution-ShareAlike license, unless stated otherwise. Cite this article:
Tech (river) Facts for Kids. Kiddle Encyclopedia.