The five departments in the region were Aude, Gard, Hérault, Lozère, and Pyrénées-Orientales.

Its capital was Montpellier, the largest city. In French, the name of the inhabitants of the region is Languedocien-Roussillonnais.

The name of the province of Languedoc originates from the language spoken in southern France, langue d'oc, also known as Occitan, and Roussillon, an area in the South of present-day Languedoc-Roussillon.

The Languedoc-Roussillon region has an area of 27,376 km2 (10,570 sq mi). It bordered to the south with Spain and Andorra; to the east is the Mediterranean Sea (the Gulf of Lion). It also bordered four French regions: Midi-Pyrénées to the west, Auvergne and Rhône-Alpes to the north, and Provence-Alpes-Côte d'Azur (PACA) to the northeast.

The Languedoc-Roussillon region is formed by five departments:

The 10 most important cities in the region are: 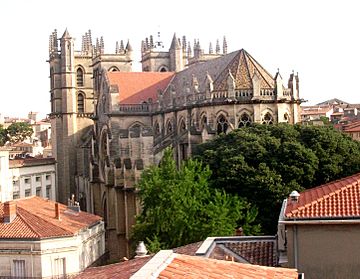 All content from Kiddle encyclopedia articles (including the article images and facts) can be freely used under Attribution-ShareAlike license, unless stated otherwise. Cite this article:
Languedoc-Roussillon Facts for Kids. Kiddle Encyclopedia.