The Pont du Gard is a Roman aqueduct in Southern France. It is in the Gard département, in the area of the commune of Vers-Pont-du-Gard. The name should mean "Bridge over the Gard" (the river Gardon). The aquaeduct supplied the city of Nîmes with water. It has a length of nearly 50 kilometres. The bridge is 49 metres high and has bows on three levels. It was probably built in the 1st century. In 1985, the Pont du Gard was classified a World Heritage Site.

The bridge has three tiers of arches, stands 48.8 m (160 ft) high, and descends a mere 2.5 centimetres (1 in) – a gradient of only 1 in 18,241 – while the whole aqueduct descends in height by only 12.6 m (41 ft) over its entire length, indicative of the great precision that Roman engineers were able to achieve using simple technology.

The aqueduct formerly carried an estimated 40,000 m3 (8,800,000 imp gal) of water a day to the fountains, baths and homes of the citizens of Nîmes. It may have been in use as late as the 6th century, with some parts used for significantly longer, but a lack of maintenance after the 4th century led to clogging by mineral deposits and debris that eventually stopped the flow of water.

After the Roman Empire collapsed and the aqueduct fell into disuse, the Pont du Gard remained largely intact due to the importance of its secondary function as a toll bridge. For centuries the local lords and bishops were responsible for its upkeep, in exchange for the right to levy tolls on travellers using it to cross the river. Over time, some of its stone blocks were looted, and serious damage was inflicted on it in the 17th century. It attracted increasing attention starting in the 18th century, and became an important tourist destination. It underwent a series of renovations between the 18th and 21st centuries, commissioned by the local authorities and the French state, which culminated in 2000 with the opening of a new visitor centre and the removal of traffic and buildings from the bridge and the area immediately around it. Today it is one of France's most popular tourist attractions, and has attracted the attention of a succession of literary and artistic visitors. 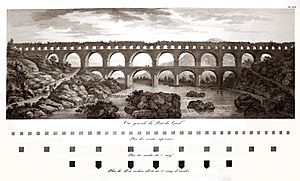 Engraving of the Pont du Gard by Charles-Louis Clérisseau, 1804, showing the seriously dilapidated state of the bridge at the start of the 19th century

The construction of the aqueduct has long been credited to the Roman emperor Augustus' son-in-law and aide, Marcus Vipsanius Agrippa, around the year 19 BC. At the time, he was serving as aedile, the senior magistrate responsible for managing the water supply of Rome and its colonies. Espérandieu, writing in 1926, linked the construction of the aqueduct with Agrippa's visit to Narbonensis in that year. Newer excavations suggest the construction may have taken place between 40 and 60 AD. Tunnels dating from the time of Augustus had to be bypassed by the builders of the Nîmes aqueduct, and coins discovered in the outflow in Nîmes are no older than the reign of the emperor Claudius (41–54 AD). On this basis, a team led by Guilhem Fabre has argued that the aqueduct must have been completed around the middle of the 1st century AD. It is believed to have taken about fifteen years to build, employing between 800 and 1,000 workers.

From the 4th century onwards, the aqueduct's maintenance was neglected as successive waves of invaders disrupted the region. It became clogged with debris, encrustations and plant roots, greatly reducing the flow of the water. The resulting deposits in the conduit, consisting of layers of dirt and organic material, are up to 50 cm (20 in) thick on each wall. An analysis of the deposits originally suggested that it had continued to supply water to Nîmes until as late as the 9th century, but more recent investigations suggest that it had gone out of use by about the sixth century, though parts of it may have continued to be used for significantly longer. 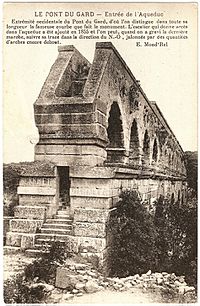 West end of the Pont du Gard in 1891, showing the stairs installed by Charles Laisné to enable visitors to enter the conduit

Although some of its stones were plundered for use elsewhere, the Pont du Gard remained largely intact. Its survival was due to its use as a toll bridge across the valley. In the 13th century the French king granted the seigneurs of Uzès the right to levy tolls on those using the bridge. The right later passed to the Bishops of Uzès. In return, they were responsible for maintaining the bridge in good repair. However, it suffered serious damage during the 1620s when Henri, Duke of Rohan made use of the bridge to transport his artillery during the wars between the French royalists and the Huguenots, whom he led. To make space for his artillery to cross the bridge, the duke had one side of the second row of arches cut away to a depth of about one-third of their original thickness. This left a gap on the lowest deck wide enough to accommodate carts and cannons, but severely weakened the bridge in the process.

In 1703 the local authorities renovated the Pont du Gard to repair cracks, fill in ruts and replace the stones lost in the previous century. A new bridge was built by the engineer Henri Pitot in 1743–47 next to the arches of the lower level, so that the road traffic could cross on a purpose-built bridge. The novelist Alexandre Dumas was strongly critical of the construction of the new bridge, commenting that "it was reserved for the eighteenth century to dishonour a monument which the barbarians of the fifth had not dared to destroy." The Pont du Gard continued to deteriorate and by the time Prosper Mérimée saw it in 1835 it was at serious risk of collapse from erosion and the loss of stonework.

Napoleon III, who had a great admiration for all things Roman, visited the Pont du Gard in 1850 and took a close interest in it. He approved plans by the architect Charles Laisné to repair the bridge in a project which was carried out between 1855–58, with funding provided by the Ministry of State. The work involved substantial renovations that included replacing the eroded stone, infilling some of the piers with concrete to aid stability and improving drainage by separating the bridge from the aqueduct. Stairs were installed at one end and the conduit walls were repaired, allowing visitors to walk along the conduit itself in reasonable safety.

There have been a number of subsequent projects to consolidate the piers and arches of the Pont du Gard. It has survived three serious floods over the last century; in 1958 the whole of the lower tier was submerged by a giant flood that washed away other bridges, and in 1998 another major flood affected the area. A further flood struck in 2002, badly damaging nearby installations.

The Pont du Gard was added to UNESCO's list of World Heritage Sites in 1985 on the criteria of "Human creative genius; testimony to cultural tradition; significance to human history". The description on the list states: "The hydraulic engineers and ... architects who conceived this bridge created a technical as well as artistic masterpiece."

The Pont du Gard has been a tourist attraction for centuries. The outstanding quality of the bridge's masonry led to it becoming an obligatory stop for French journeymen masons on their traditional tour around the country (see Compagnons du Tour de France), many of whom have left their names on the stonework. From the 18th century onwards, particularly after the construction of the new road bridge, it became a famous staging-post for travellers on the Grand Tour and became increasingly renowned as an object of historical importance and French national pride.

All content from Kiddle encyclopedia articles (including the article images and facts) can be freely used under Attribution-ShareAlike license, unless stated otherwise. Cite this article:
Pont du Gard Facts for Kids. Kiddle Encyclopedia.