The Gardon or Gard is a river in southeastern France, in the Lozère and Gard departments in the Occitanie region. It is a right tributary of the Rhône river.

The Gard department is named after this river.

Its average yearly discharge (volume of water which passes through a section of the river per unit of time) is 32.7 m3/s (1,150 cu ft/s) at Sanilhac-Sagriès in the Gard department. 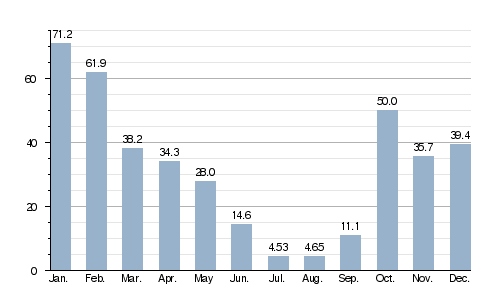 The Gardon (known here as Gardon d'Anduze) starts in the Cévennes, southeastern Massif Central, in the commune of Saint-Martin-de-Lansuscle, Lozère department near Prat Reboubalès, at an altitude of about 1,050 m (3,445 ft).

The Gardon d'Anduze joins the Gardon d'Alès between the communes Cassagnoles and Vézénobres, at an altitude of about 90 m (295 ft); from here, the river is usually known simply as Gard.

The Gardon flows to the southeast, in general, and passes through the Lozère and Gard departments, in the Occitanie region, and a total of 37 communes, most of them in the Gard department.

Finally, it flows, as a right tributary into the Rhône river near Comps at 5 m (16 ft) of altitude.

The main tributaries, with a length greater than 20 km, of the Gardon are:

All content from Kiddle encyclopedia articles (including the article images and facts) can be freely used under Attribution-ShareAlike license, unless stated otherwise. Cite this article:
Gardon Facts for Kids. Kiddle Encyclopedia.