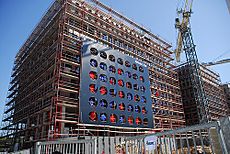 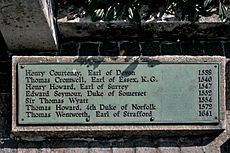 A scaffold is a temporary structure used for support. Originally scaffolds were made of wood, and bamboo scaffolds are still used in many parts of the world. In the western world they are now made of metal.

The most common use of scaffolds is to allow work on buildings. Another use of the word was the wooden platforms built for executions. This is now a rare use of the word. 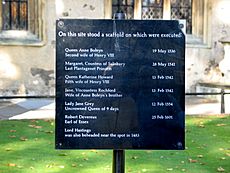 More important people were executed in the Tower of London.

All content from Kiddle encyclopedia articles (including the article images and facts) can be freely used under Attribution-ShareAlike license, unless stated otherwise. Cite this article:
Scaffold Facts for Kids. Kiddle Encyclopedia.