Aude is a department in the region of Occitanie in southern France. It is named after the Aude river.

The inhabitants of the Aude are known, in French, as Audois (women: Audoises).

Aude was created in 1790 during the French Revolution, when the whole of France was divided into departments, replacing the old provinces. Aude was formed with part of the old province of Languedoc.

It was divided in six districts: Castelnaudary, Carcassonne, Narbonne, Lagrasse, Limoux and Quillan, with Carcassonne as is capital.

A skull was found, and named Homme de Tautavel (Tautavel Man). It was found in a cave on the site called Caune de l'Arago, near Tautavel. The fossils are between 300.000 and 450.000 years old. There are over 80 fragments; the skull belonged to a man in his twenties. He was about 1.65 m, and weighed around 45–55 kg. Other remains are two mandibles, belonging to a woman in her fifties, and to a man, about 20 to 25 years old. It looks like they did not know how to use fire yet. It also looks like they might have been cannibals, or that they preferred to scavenge for food, rather than hunt. Some bones of rhinoceros, horses, wild sheep (called Mouflon), Tahrs (resemble wild goats), Muskox (a type of bovine), deer, and reindeer were found in the cave. There is an ongoing debate if this hominian is directly related to the Neanderthal. If they are not they would be Homines erecti (currently they are classified as H. erectus Tautavelensis). If they are direct predecessors of the Neanderthals, they would be Homo heidelbergensis.

Aude has an area of 6,139 km2 (2,370 sq mi). It is surrounded by the departments of Pyrénées-Orientales, Ariège, Haute-Garonne, Tarn, and Hérault, with the Gulf of Lion (Mediterranean Sea) on the east.

The département is managed by the Departamental Council of Aude in Carcassonne. Aude is part of the region of Occitanie.

There are 3 arrondissements (districts), 19 cantons and 436 communes (municipalities) in Aude.

The following is a list of the 19 cantons of the Aude department (with their INSEE codes), following the French canton reorganisation which came into effect in March 2015: 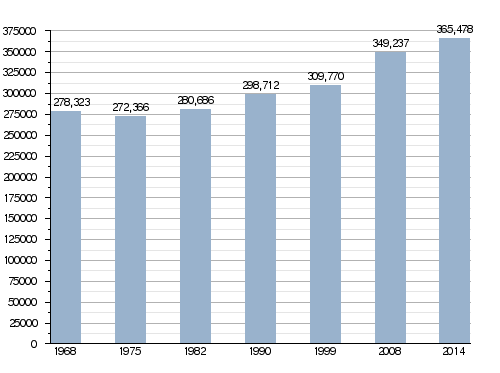 All content from Kiddle encyclopedia articles (including the article images and facts) can be freely used under Attribution-ShareAlike license, unless stated otherwise. Cite this article:
Aude Facts for Kids. Kiddle Encyclopedia.