Limoux (Occitan: Limós) is a French commune, a subprefecture in the Aude department. It is in the Languedoc-Roussillon region. It is also the capital of the arrondissement of Limoux.

Limoux lies on the Aude river and is about 30 km (19 mi) due south of Carcassonne.

The inhabitants of this city are known, in French, as Limouxins (women: Limouxines). 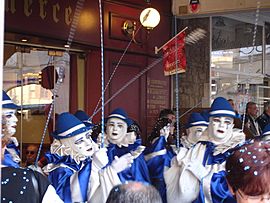 The town is well known for its wine called Limoux wine. It also has a Winter festival called Fècos. It is often called Carnaval de Limoux in France. It is usually between January and Easter.

Limoux was the birthplace of:

Limoux is twinned with:

All content from Kiddle encyclopedia articles (including the article images and facts) can be freely used under Attribution-ShareAlike license, unless stated otherwise. Cite this article:
Limoux Facts for Kids. Kiddle Encyclopedia.