The Agly River (Catalan: Aglí, Occitan: Aglin) is a river in southern France. It flows mostly to the southeast through the Plain of Roussillon, in the region of Occitanie. It ends in the Mediterranean Sea.

On its way to the Mediterranean Sea, it flows through the departments of Aude and Pyrénées-Orientales.

It then goes into the Pyrénées-Orientales by the gorges of Galamus and flows into the Mediterranean Sea south of Barcarès.

There is a dam on the Agly river, on Caramany, Pyrénées-Orientales; it was built to prevent floods and to store water. 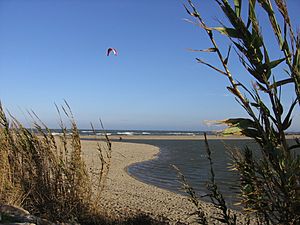 Mouth of the Agly

The Agly is a very irregular small river. Its flow was observed over a period of 42 years (1967-2008) in Estagel about twenty kilometers from its mouth and after receiving the waters of its tributary Verdouble.

The discharge of the river at this location is 6.31 m3 per second.

The Agly shows typical seasonal fluctuations like other small rivers in southern France. The highest levels of the river are in winter and spring, from December to May inclusive, with the highest level in February. They are followed by a rapid fall in the flow during the low water period that goes from late June to early October.

The Angly has 19 tributaries; the main ones are: 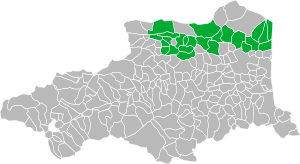 Communes in the Pyrénées-Orientales traversed by the Agly.

Departments and towns along the river

All content from Kiddle encyclopedia articles (including the article images and facts) can be freely used under Attribution-ShareAlike license, unless stated otherwise. Cite this article:
Agly Facts for Kids. Kiddle Encyclopedia.