A taifa (from Arabic: طائفة‎code: ar is deprecated ṭā'ifa, plural طوائف ṭawā'if) was an independent Muslim-ruled principality. Taifas developed during the history of Iberia. They were usually emirates or little kingdoms, but there was one oligarchy as well, Seville. A number were formed in the Al-Andalus (Moorish Iberia) after the end of the Umayyad Caliphate of Cordóba in 1031.

They developed because of an administrative division of the Umayyad Caliphate of Córdoba and an ethnic division of its elite. It was divided among Arabs (a powerful but tiny minority), Berbers, Eastern European former slaves and Iberian Muslims (known as Muladíes (the great majority).

There was a second period when taifas developed: the middle of the 12th century, when the Almoravid dynasty was in decline.

In the 11th century and again in the mid 12th century, the emirs (rulers) of the taifas kept fighting among themselves, not only militarily but also for cultural prestige. They tried to recruit the most famous poets and artisans.

After the end of the Caliphate, the rival Muslim kingdoms were much weaker than the Christian ones and so they had to submit and to pay tribute.

Taifas often hired Christian mercenaries to fight neighbouring realms (both Christian and Muslim). The most dynamic taifa, which conquered most of its neighbours before the Almoravid invasion, was Seville. Zaragoza was also very powerful and expansive, but was kept in check by the neighbour Christian states of the Pyrenees. Zaragoza, Toledo and Badajoz had previously been the border military districts of the Caliphate. 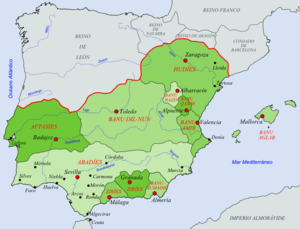 Additionally, but not usually considered taifas, are:

All content from Kiddle encyclopedia articles (including the article images and facts) can be freely used under Attribution-ShareAlike license, unless stated otherwise. Cite this article:
Taifa Facts for Kids. Kiddle Encyclopedia.