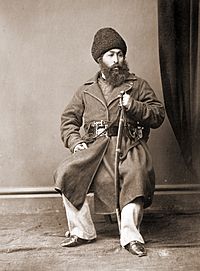 Sher Ali Khan, Emir of Afghanistan, posing for a portrait in 1869

Emir (Arabic: أمير; female: أميرة; emira; (Persian and Urdu: امیر) "commander" or "general", also "prince"; also transliterated as amir, aamir or ameer) is a high title of nobility or office. It is used throughout the Arab world and historically in some Turkic states and Afghanistan. Emirs are usually considered high-ranking sheiks, but in monarchical states the term is also used for princes; then "emirate" means more or less the same as principality in this context. Emir is used also as a name in Turkey like Emir Niego and Emir Sevinc. Emir is the most common spelling in English and many other languages (for example, United Arab Emirates). The spelling amir, that is closer to the original Arabic, is more common for its compounds (e.g., admiral) and in individual names.

All content from Kiddle encyclopedia articles (including the article images and facts) can be freely used under Attribution-ShareAlike license, unless stated otherwise. Cite this article:
Emir Facts for Kids. Kiddle Encyclopedia.