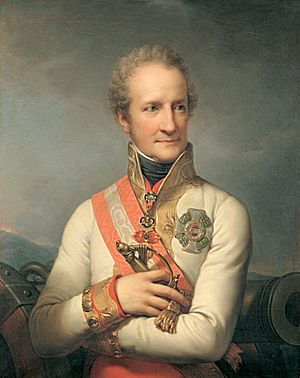 Prince Johann I Josef, last prince of Liechtenstein prior to the end of the Holy Roman Empire

A principality (sometimes also called princedom) is a country which is ruled by a prince or princess. Principalities were common in the Middle Ages. Some principalities that still remain today are Andorra, Monaco and Liechtenstein. Examples of subnational principalities are Asturias (Spain) and Wales (UK).

Some states claim to be principalities but are not recognised by other countries: Sealand (a Sea Fort off the English coast), Seborga (a small town in Italy), the Principality of Hutt River in Australia and the Principality of Minerva in the Pacific. These states are examples of micronations.

Sometimes the word is also used to mean dependent territories in Africa, Asia and India, pre-Columbian America and Oceania. For these, the word princely states is generally preferred, especially if they came under the authority of a European colonial power.

All content from Kiddle encyclopedia articles (including the article images and facts) can be freely used under Attribution-ShareAlike license, unless stated otherwise. Cite this article:
Principality Facts for Kids. Kiddle Encyclopedia.