Alston is a small town in Cumbria, England, within the civil parish of Alston Moor on the River South Tyne. It shares the title of the 'highest market town in England', at about 1,000 feet (300 m) above sea level, with Buxton, Derbyshire. Despite being at such an altitude and in a remote location, the town is easily accessible via the many roads which link the town to Weardale valley, Teesdale, Hartside Pass (and towns in Cumbria such as Penrith) as well as the Tyne valley. Historically part of Cumberland, Alston lies within the North Pennines, a designated Area of Outstanding Natural Beauty and is surrounded by beautiful views of the surrounding fells and the South Tyne Valley. Much of the town centre is a designated Conservation Area which includes several listed buildings.

Alston lies within the North Pennines Area of Outstanding Natural Beauty, more than 15 miles (24 km) from the nearest town, and is surrounded by moorland. Nearby villages include Garrigill and Nenthead.

Situated at the crossroads/junction of the A686, A689 and B6277, the town lies on the confluence of the River South Tyne and the River Nent. On 18 May 2013 very heavy rain resulted in flooding in seven areas of Alston, affecting thirty-six properties. The Environment Agency records indicate that 51mm of rain fell that day.

The landscape of the area is built up from limestone, sandstone and shale. The area is rich in minerals, in particular lead deposits, and the landscape has been heavily influenced by the effects of varying methods of mining over the centuries. 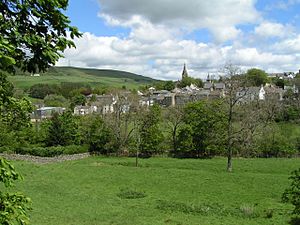 Alston from the west

This town has a cool and relatively rainy oceanic climate (Cfb, according to the Köppen climate classification), with mild summers and chilly winters, with snowfalls. It is one of the coldest inhabited places in England.

There are some ski-tows on the northwest slopes of Burnhope Seat, a hill situated 4 miles away from the urban area of Alston. This forms the Yad Moss ski facility, which has recently been upgraded by Sport England.

The earliest evidence of population in the area comes from pottery fragments, a gold basket-earring and flint tools found in one of two barrows excavated in 1935 (2 miles [3 km] NNW of Alston at Kirkhaugh), these were dated between 2000 BC and 1700 BC.

Evidence of Roman activity in the area comes from the earth remains of Whitley Castle, thought to be the Roman fort (Castra) of Epiacum built and rebuilt by the Sixth and Twentieth Legions between the 2nd and 3rd centuries. The fort lies on the Maiden Way Roman road which runs north from Kirkby Thore (Bravoniacum) to Carvoran (Magnae) on Hadrian's Wall. Whitley Castle would have guarded this central supply route to Hadrian's Wall, and may also have helped protect lead and silver deposits in the upper reaches of the south Tyne valley.

The name of the town is recorded in 1164–71 as Aldeneby and in 1209 as Aldeneston, and seems to mean "the settlement or farmstead belonging to [a Viking man named] Halfdan".

In the 10th century, Alston Moor was part of the Liberty of Tynedale, which was an estate of the Scottish Kings within England, a situation that resulted in many years of confusion over the sovereignty of the area.

In 1085, the Barons de Veteriponte became the first recorded Lords of the Manor; they held the moor on behalf of the kings of Scotland while the kings of England retained the mineral rights. This was confirmed in a hearing during 1279 that concluded that the miners of the area were distinct from the local population, thus paying their dues to the English crown instead of to Scotland. As a result, the miners lived in their own self-regulated communities under English protection.

In 1269 John de Balliol, the king of Scotland, invaded the North of England; as a result Edward I moved to reclaim the Scottish estates and Tynedale, which included Alston Moor, was taken under direct control of the English crown where it remains.

Despite the town being on the Tyne and being historically part of Tynedale, the area has never been part of either Hexhamshire or Northumberland but part of Cumberland and later Cumbria. This was probably because the mines in the area were at one time administered from Carlisle.

Historically the area has been mined for lead, silver, zinc, coal and fluorspar. The nearby Roman fort of Whitley Castle (Epiacum) may in part have been sited to control and protect the lead mines there.

In the 13th century, the area was known as the silver mines of Carlisle—silver was found in a high proportion (up to 40 troy ounces per long ton or 1.2 g/kg of smelted lead) and was used to create coinage in the Royal Mint established in Carlisle for the purpose. Most mining was very small scale until the mid-18th century,

The biggest mine owner in the area was the London Lead Company; this Religious Society of Friends (Quakers) organisation with enlightened employment policies established an interest in the area during the early 18th century. In 1745, it began construction of a school, a library, a sanitary house, a surgeon's house, a market hall with clock tower, a laundry and a 'ready-money' shop in Nenthead, four miles away.

Many of the last mines closed in the 1950s. A small drift coal mine (Ayle Colliery) was still active in 2013.

The population census figures show that at its peak during 1831 the population of the parish of Alston Moor was 6,858 people. Today that figure is about 1,200. The population of the town of Alston was 1,128 according to the 2001 Census. The community has its own website which is a result of the Cybermoor Project (cybermoor.org), which has brought the Internet to almost every home on Alston Moor, and broadband to many. This allowed people with little or no education access to online courses and training. The problem of the area's relative remoteness compared to other areas of England was solved by utilising IEEE 802.11 technology to construct the network infrastructure.

Landmarks and buildings of note

The town hall is a focal point for the community, being a venue for many local social events. It also contains the tourist information centre and some local administration offices. Until the late 1980s the town hall also contained the public library and a branch of the Trustee Savings Bank. The bank closed down but the library moved to premises in the Market Place, then moved back to the town hall in September 2008. Construction of the neo-gothic building started in 1857 when Hugh Lee Pattinson laid the foundation stone. The architecture was designed by A.B. Higham and the estimated costs were £2,000, although the final costs were closer to £3,000; these were paid for by public subscription.

Although the town does not hold a regular market it still maintains the legal right to do so. The market cross, which acts as a focal point in the centre of town, was constructed in 1981 to replace one which was demolished by a wagon in January 1980. That earlier cross had itself replaced a cross of 1883 which was knocked down by a lorry in 1968.

A regular producers' market now takes place in the town hall from April to September selling food and crafts produced in Cumberland, Northumberland and County Durham, celebrating Alston's position at the crux of these three counties. 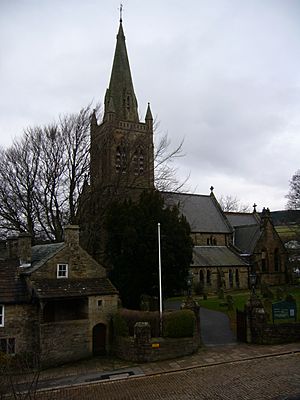 The parish church was built in 1869 on the site of earlier churches. The church spire was only completed in 1886. A unique item in the church is a clock which belonged to the Earl of Derwentwater, believed to be of 16th century origin. It was restored in 1978. One of the church bells which was cast in 1714 also belonged to the Earl of Derwentwater. It was installed in the previous church of 1770. Four of the bells were installed in memory of Andrew Graham Stewart Steele, churchwarden from 1943 until his murder in the Midland Bank on 13 September 1949. The bells cannot be pealed as the tower is not strong enough, but they are struck by a clapper.

During the area's peak of prosperity in 1776 John Smeaton began construction of an underground drain (the "Nent Force Level") to de-water the mines of the Nent Valley and assist with the transport of extracted materials as well as to locate new mineral seams. The canal took 66 years to construct at a cost of £80,000, and became known as "Smeaton's Folly". In the 1830s mine manager and engineer said that it could be visited "in boats 30 feet in length, which are propelled in four feet of water by means of sticks projecting from the sides of the level; and thus may be enjoyed the singular novelty of sailing a few miles underground". It was intended to be 9 feet square but in the softer terrain was extended to 9'×16', dead level for 3¾ miles (6 km) to allow boat use, with a rise of 35 fathoms (210 ft/64 m) at Lovelady Shield and then driven into the Nenthead ground. The amount of ore found was disappointing, though not insignificant.

Access to the Nent Force Level is currently extremely difficult although efforts have been made to develop a heritage centre to make this extraordinary piece of engineering accessible to the public.

Alston in the media

Front Street and the Market Cross of the town were used as filming locations in an adaptation of Jane Eyre. The town was also adapted to resemble a seaside village where Oliver is born for the ITV TV mini series Oliver Twist.

The League of Gentlemen

The comedy series The League of Gentlemen is based on Alston.

In August 2005, Alston made news regarding the town's apparent lack of women, with a claimed ratio of 10 men to every woman in the town. A group of young men from Alston, led by Vince Peart, set up the "Alston Moor Regeneration Society" to persuade women to come to Alston. Articles appeared in the Daily Telegraph, The Guardian and the BBC. A documentary was shown on Channel 4 on 11 October 2006. More than two years later, the Guardian reported that Alston shared first position with Bere Alston in Devon in the top 10 list of places in Britain where the imbalance was at its worst.

The area is stationed on a number of routes including the long−distance footpath the Pennine Way, and the Sea to Sea (C2C) Cycle Route.

Alston railway station was formerly the terminus of a branch line from Haltwhistle. The town's rail link to Haltwhistle was completed in 1852 by the Newcastle and Carlisle Railway Company. The closure of the line was decided in the Beeching Report in 1962, but closure was rejected due to lack of a direct road link. After a road was built, closure was again proposed in 1973 and the line closed on 1 May 1976. It was one of the last enacted closures of the Beeching Report (another being the Bridport branch line from Bridport to Maiden Newton in Dorset which closed in 1975).

Part of the route, between Alston and Lintley, three miles in length, is now operated as the narrow gauge South Tynedale Railway. The railway is particularly popular with tourists and passenger trains operate between April and October, with Santa Special trains operating on certain dates in December each year.

Go North East operates two buses a day between Alston and Haltwhistle, where connections can be made to buses and trains to Carlisle and Newcastle. Wright Brothers Coaches operates an 82-mile bus route linking Newcastle with Keswick via Hexham, Haydon Bridge, Alston and Penrith from July to September each year. There are term-time bus services to Carlisle primarily for college students. A summary of local bus services can be found on this Cumbria County Council page.

All content from Kiddle encyclopedia articles (including the article images and facts) can be freely used under Attribution-ShareAlike license, unless stated otherwise. Cite this article:
Alston, Cumbria Facts for Kids. Kiddle Encyclopedia.