Kids Encyclopedia Facts
Not to be confused with Brampton, Eden.

Brampton is a small market town, civil parish and electoral ward within the City of Carlisle district of Cumbria, England, about 9 miles (14 km) east of Carlisle and 2 miles (3.2 km) south of Hadrian's Wall. Historically part of Cumberland, it is situated off the A69 road which bypasses it. Brampton railway station, on the Newcastle and Carlisle Railway, is about a mile outside the town, near the hamlet of Milton.

St Martin's Church is famous as the only church designed by the Pre-Raphaelite architect Philip Webb, and contains one of the most exquisite sets of stained glass windows designed by Sir Edward Burne-Jones, and executed in the William Morris studio.

The town was founded in the 7th century as an Anglian settlement.

Brampton was granted a Market Charter in 1252 by King Henry III, and became a market town as a result.

During the Jacobite rising of 1745, Charles Edward Stuart stayed in the town for one night, marked by a plaque on the wall of the building (a shoe shop) currently occupying the location; here he received the Mayor of Carlisle who had been summoned to Brampton to surrender the city to the Young Pretender. The Capon Tree Monument, to the south of the town centre, commemorates the 1746 hanging of six Jacobites from the branches of the Capon Tree, Brampton's hitherto traditional trysting place.

In 1817 the Earl of Carlisle built the octagonal Moot Hall, which is in the centre of Brampton and houses the Tourist Information Centre. It replaced a 1648 building which was once used by Oliver Cromwell to house prisoners.

Much of Brampton consists of historic buildings built of the local red sandstone.

William Howard School was host to "Brampton Live" every summer, an ever-growing music festival that, since its first appearance in 1995, become the largest folk/roots/world music festival in the North of England. Major artists have included the Levellers, the Waterboys, Egudo Embako, Richard Thompson, Suzanne Vega, Loudon Wainwright III, Altan, Tommy Emmanuel, Seth Lakeman and many others. The last "Brampton Live" took place in 2009 and has been, to a certain extent, replaced in 2012 by the "Stepping Stones Festival" organised by Maddy Prior (of Steeleye Span) held in early May at the Brampton Community Centre. 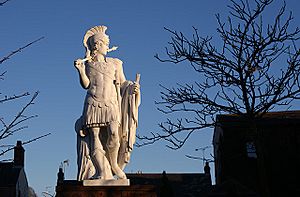 Brampton was granted Fairtrade status on 6 January 2005, becoming one of the first hundred towns in the UK to be recognised in this way. Brampton Primary School was awarded Fairtrade status in Spring 2007 and RAF Spadeadam became Britain’s first military base to sign up to Fairtrade.

Brampton and Beyond Community Trust

Brampton and Beyond Community Trust is a community-based development trust serving Brampton and the surrounding area in north east Cumbria. The Trust became a registered company and a registered charity in July 2010. The Trust aims to provide accessible, affordable and responsive services for local people and seeks to be self-financing. In 2011, the Brampton and Beyond Community Trust formally took over the assets of Brampton Community Association together with responsibility for the operation of the Brampton Community Centre.

Brampton and Beyond Energy (BABE) wants to construct an anaerobic digester on the Townfoot Industrial Estate in Brampton. The project would cost about £1m and it would be expected to make £60,000 profit each year, turning silage and slurry into electricity. Opponents of the proposal cite concerns over odour, noise and the location. The Parish Council discussed the proposal at an emergency meeting at the end of February 2014.

In 2011, Brampton became the 66th town in the United Kingdom and the second in Cumbria to gain Walkers are Welcome status.

All content from Kiddle encyclopedia articles (including the article images and facts) can be freely used under Attribution-ShareAlike license, unless stated otherwise. Cite this article:
Brampton, Carlisle Facts for Kids. Kiddle Encyclopedia.