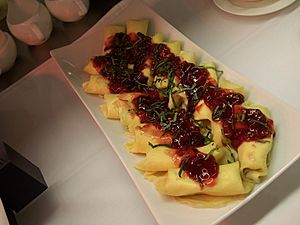 Cumberland sauce is a fruit sauce, usually used on non-white meats, such as venison, ham, and lamb. Coming out of the long-standing medieval tradition of piquant spicy fruit sauces rendered sharply sour with verjuice or vinegar and served with meat, but created sometime in the 19th century, the sauce appears in various editions of Mrs Beeton's Book of Household Management. The sauce was invented in Germany, according to Alexis Soyer's recipe in The Gastronomic Regenerator (1846) for a port-wine based sauce accompanying boar’s head, which Janet Clarkson notes "contains what we think of as the required citrus note in the form of Seville orange rind (along with mustard)." It is a more complex version of a simple redcurrant sauce.

All content from Kiddle encyclopedia articles (including the article images and facts) can be freely used under Attribution-ShareAlike license, unless stated otherwise. Cite this article:
Cumberland sauce Facts for Kids. Kiddle Encyclopedia.