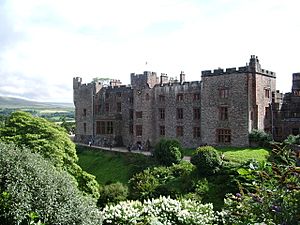 Muncaster Castle is a privately owned castle overlooking the River Esk, about a mile east of the west-coastal town of Ravenglass in Cumbria, England. It is recorded in the National Heritage List for England as a designated Grade I listed building. 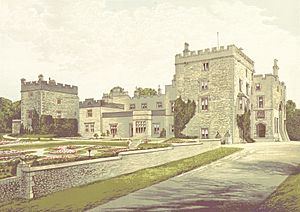 The place is now corruptly known as "Muncaster", which first appeared in a Cumberland church register in 1577, the original name according to all old evidence and records being "Mulcaster", registered in the pipe rolls of Cumberland circa 1150 (also as Molecaster and Mulecaster in 1190 and 1236 respectively).

The placename "Muncaster" contains the Latin word castra, meaning "encampment", or "fort". It is suspected that the site of the castle lies on foundations dating to the Roman era, which, if they exist, may represent a castellum for the nearby Roman fort of Glannoventa at Ravenglass.

The Muncaster estate was granted to Alan de Penitone in 1208. The oldest parts of the castle include the Great Hall and the 14th-century pele tower, a type of watch-tower fortification unique to the English-Scottish border region.

Between 1860 and 1866 Anthony Salvin extensively remodelled Muncaster Castle for the Barons Muncaster. Sir John Frecheville Ramsden, 6th Baronet discussed proposed modifications to the castle with Edwin Lutyens from 1916, but nothing came of these; Lutyens did design the Muncaster War Memorial, constructed in 1922, on a commission from Ramsden.

Muncaster's gardens include features designed to take advantage of views of the Esk Valley and the mountains. There is an owl sanctuary, and a maze.

Muncaster Castle is still owned by the Pennington family, who have lived at Muncaster for at least 800 years, and a family residence. Until her death in 2011, Phyllida Gordon-Duff-Pennington and her husband Patrick Gordon-Duff-Pennington (1930-2021) worked for three decades to restore the castle from a "crumbling relic" and establish it as a place for tourism and events. It now has more than 90,000 visitors a year.

The Luck of Muncaster

After the Battle of Towton in 1461, according to tradition, Henry VI fled to Muncaster Castle where Sir John Pennington sheltered him. Henry gave Sir John a glass drinking bowl, in the hope that they should prosper so long as it remained unbroken. The glass, which is still intact, and still at the castle, is now known as 'The Luck of Muncaster'.

Each year the castle recruits its own jester in the culmination of a competition that celebrates the art of tomfoolery. The last jester, named Tom Skelton, whose full-length portrait hangs at the castle, is believed to be the original Tom Fool, who is often said to have inspired Shakespeare's Fool in King Lear. Legend has it that Skelton was enlisted by Wild Will of Whitbeck to behead a carpenter's son, Dick, a servant at the castle, who was an unwanted suitor of his betrothed, Helwise Pennington, the unmarried daughter of Sir Alan Pennington. He is rumored to have said, "There, I have hid Dick’s head under a heap of shavings; and he will not find that so easily, when he awakes, as he did my shillings."

All content from Kiddle encyclopedia articles (including the article images and facts) can be freely used under Attribution-ShareAlike license, unless stated otherwise. Cite this article:
Muncaster Castle Facts for Kids. Kiddle Encyclopedia.