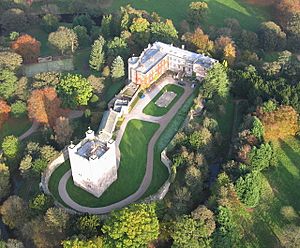 Appleby Castle from above

Appleby Castle is in the town of Appleby-in-Westmorland overlooking the River Eden . It consists of a 12th-century castle keep which is known as Caesar's Tower, and a mansion house. These, together with their associated buildings, are set in a courtyard surrounded by curtain walls. Caesar's Tower and the mansion house are each recorded in the National Heritage List for England as a designated Grade I listed building. The uninhabited parts of the castle are a scheduled ancient monument. 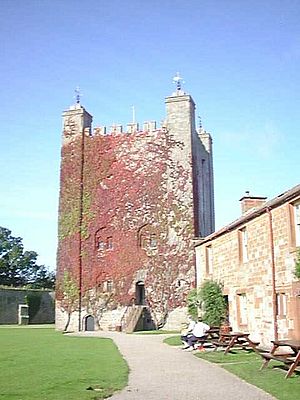 The castle was founded by Ranulf le Meschin at the beginning of the 12th century. In about 1170 the square stone keep known as Caesar's Tower was built. The castle was in royal hands when the Scottish king, William the Lion, invaded the Eden Valley in 1174. The constable of the castle surrendered without a fight.

In 1203 the castle was granted to Robert I de Vipont by King John. In 1264 it came into the possession of Roger de Clifford, through his marriage to Isabel de Vipont, one of the two daughters and co-heiress of Robert II de Vipont. Appleby Castle remained for nearly 400 years in the ownership of the Clifford family, who were responsible for much restoration of the castle. Roger's son, Robert de Clifford, inherited the castle in 1282.

The north wall of house and the west part of the north wing with the round tower date from the 13th century. The eastern part of the house was built in 1454.

King James I stayed in the castle in 1617. In the mid-17th century, Lady Anne Clifford made the castle her home. The castle was partly dismantled following a siege by roundhead forces in 1648, during the Second English Civil War. However, it was restored by Lady Anne Clifford in 1651–53. On her death the castle passed to the Earls of Thanet. They were responsible for converting the hall block into a classical mansion house. The upper parts of Caesar's Tower were altered in the 17th and 18th centuries. The house was largely rebuilt in 1686 and the northwest wing was added in 1695. In the 19th century it was again restored and sash windows were inserted.

In 1972 the castle was purchased by Ferguson Industrial Holdings (FIH PLC) and became the primary residence of Denis Vernon, the CEO of the company, and his family. The Vernons lived at Appleby Castle until 1990. Vernon, a passionate conservationist, established a rare breeds survival centre. Considerable improvements were made to the fabric of all the buildings, not least the 12th-century keep. During this period, the castle was the headquarters and training centre of FIH PLC and for those running the conservation centre. Documentary and movie director Susannah White featured Denis Vernon and Appleby Castle in her 1998 BBC documentary The Gypsies Are Coming on Appleby Horse Fair.

Appleby Castle is now the private residence of the Nightingale family. Parts of the castle were opened to the public in September 2013 for small private tours, tickets can be booked online or bought at the Grounds Hut on the Gate.

Caesar's Tower is built in grey stone rubble and ashlar. It is about 80 feet (24 m) high and has four storeys. The main house is in two wings which are at right angles to each other. A semicircular round tower protrudes from the north wall of the north wing and a large square tower is at the south end of the east wing. 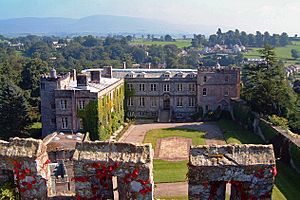 East range of Appleby Castle in 2002

All content from Kiddle encyclopedia articles (including the article images and facts) can be freely used under Attribution-ShareAlike license, unless stated otherwise. Cite this article:
Appleby Castle Facts for Kids. Kiddle Encyclopedia.