Kentmere is a valley, village and civil parish in the Lake District National Park, a few miles from Kendal in the South Lakeland district of Cumbria, England. Historically in Westmorland, the parish has a population of 159 as of the 2011 Census. 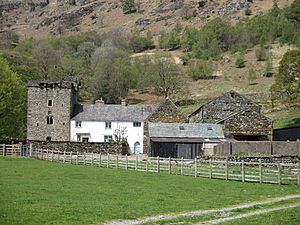 The valley has evidence of habitation going back to roughly 4000 BC, when the valley and surrounding hillsides were almost entirely covered with forest. A major archaeological research project conducted in the valley by a local archaeology group between 1983 and 1999 surveyed and recorded hundreds of archaeological features, as well as excavating two sites – a (radiocarbon dated) pre-Viking and Viking age upland settlement at Bryant's Gill and part of a medieval site and farmstead near Kentmere Hall. The valley's rich archaeological heritage also includes the remains of at least five large prehistoric sites incorporating the remains of round houses, stockyards and more.

Kentmere Hall is famous for its tower house; a fortification built for status in the 13th – early 14th centuries – ostensibly to guard against raiding parties from Scotland.

St Cuthbert's Church, Kentmere was built to the east of Kentmere Hall. As is often the case with medieval churches, there is an ancient yew tree situated nearby which has been estimated to date back to the time of William I, indicating that worship had been taking place there at an early stage in the village's history. A graveyard for the church was dedicated in 1701. The chapel was remodelled in the 19th century and again in the 1950s. The roof was of 16th century date, but in 2016 was replaced. 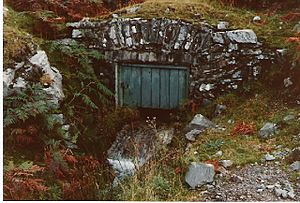 Entrance to underground mine near Browfoot

Official records of mining in the area go back at least as far as 1898. Before that it is likely, due to the particularly craggy nature of the valley, that the local dry stone walls and stone for housing were taken from the slopes around the valley, even as far back as the Bronze Age. There are two main open cast mines in the valley. The first is Jumb Quarry, situated within a few hundred yards of the early settlement at Tongue House.

The second is situated at Steelrigg near Staveley. Both produced green slate. There were also at least six underground mines in the valley. At the height of production in 1914 Steelrigg employed five men below ground and nine above.

All content from Kiddle encyclopedia articles (including the article images and facts) can be freely used under Attribution-ShareAlike license, unless stated otherwise. Cite this article:
Kentmere Facts for Kids. Kiddle Encyclopedia.