The church dates from the 16th century. It was surveyed by the architect, J. S. Crowther, of Manchester in 1864, who wrote a report to Vice-Admiral John Wilson of Troutbeck, concerning plans for the restoration. Crowther found that a wall had been built across the nave, reducing its length by one half. He suggested that this was removed. In addition he recommended re-slating the roof, adding cast iron gutters and downspouts, repairs to the woodwork of the doors and glazing of windows, installation of heating, re-fitting the chancel, a new wooden floor to support the seating, and the restoration of the tower.

It was rebuilt at a cost of £450 (equivalent to £29,600 in 2018),2018 the tower was raised and the panelled square box pews were replaced by low backed open benches. It was re-opened for worship by the Bishop of Carlisle, Rt Revd Samuel Waldegrave on 22 November 1866.

Further alterations were made in the 1930s.

The church organ was built by Wilkinson and Son of Kendal. A specification of the organ can be found on the National Pipe Organ Register. 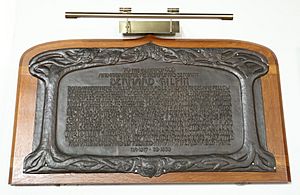 All content from Kiddle encyclopedia articles (including the article images and facts) can be freely used under Attribution-ShareAlike license, unless stated otherwise. Cite this article:
St Cuthbert's Church, Kentmere Facts for Kids. Kiddle Encyclopedia.