Kids Encyclopedia Facts
This page is about the fell in the English Lake District. For other uses, see High Street (disambiguation).
"Rough Crag" redirects here. For the "outlying fell" of that name, see Circuit of Devoke Water.

High Street is a fell in the English Lake District. At 828 metres (2,718 ft), its summit is the highest point in the far eastern part of the national park. The fell is named after the Roman road which ran over the summit.

The Roman road crosses the fell on its journey between the forts at Brougham (Brocavum) near Penrith and at Ambleside (Galava). Situated in one of the quieter areas of the Lakes, the High Street range has quite gentle slopes with a flat summit plateau. It was these characteristics which persuaded Roman surveyors to build their road over the fell tops rather than through the valleys which, at the time, were densely forested and marshy thus making them susceptible to ambushes.

The fell's flat summit was also used as a venue for summer fairs by the local population in the 18th and 19th centuries. People from the surrounding valleys would gather every year on 12 July to return stray sheep to their owners; games and wrestling would also take place as well as horse racing. The summit of High Street is still known as Racecourse Hill, and is so named on maps, and fell ponies can be found grazing occasionally on its summit. The last of the summer fairs was held in 1835.

The River Kent, which flows south through the town of Kendal before emptying into Morecambe Bay, has its source on High Street's southern slopes. Dropping 300 m in 40 km (1000 feet in 25 miles), the Kent is reputed to be the fastest-flowing river in England.

High Street's eastern side is craggy and precipitous as it falls away towards Haweswater Reservoir. There are two tarns underneath the eastern crags — Blea Water and Small Water; Blea Water stands in a classic mountain corrie and at 200 feet is the deepest tarn in the Lake District.

A wall follows the ridge over the flat summit, the highest point marked by an Ordnance Survey triangulation column which has been painted white. The view stretches from the Pennines in the east to a great arc of Lakeland hills filling the western horizon. The Helvellyn range and Southern Fells are particularly striking.

The climb from Mardale is an exhilarating ridge walk, with views down into Riggindale which at one time might have been supplemented by the sight of a golden eagle, Riggindale had the only bird of this kind left in England, a solitary male, which had been on its own there since 2004, but has not been seen since 2016. High Street can also be climbed from Patterdale, Kentmere and Troutbeck. The full south-to-north traverse of the High Street ridge from Ings near Windermere to the Eamont valley at the northern end of Ullswater is a 30-kilometre hike over twelve summits, and should be undertaken only by experienced walkers. 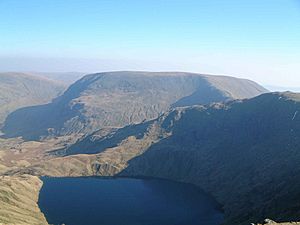 View from the summit of High Street, looking towards Harter Fell with Blea Water in the foreground

All content from Kiddle encyclopedia articles (including the article images and facts) can be freely used under Attribution-ShareAlike license, unless stated otherwise. Cite this article:
High Street (Lake District) Facts for Kids. Kiddle Encyclopedia.