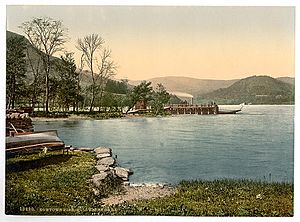 Many regard Ullswater as the most beautiful of the English lakes, it has been compared to Lake Lucerne in Switzerland.

It is a typical Lake District narrow "ribbon lake" formed after the last ice age when a glacier scooped out the valley floor. When the glacier retreated, the deepened section became a lake.Three separate glaciers formed the lake. The surrounding mountains give Ullswater the shape of a stretched 'Z' with three distinct segments (or 'reaches') that wend their way through the surrounding hills.

For much of its length Ullswater forms the border between the ancient counties of Cumberland and Westmorland.

The village of Glenridding, at the southern end of the lake, is popular with tourists of all kinds. For mountain walkers, England's third highest mountain, Helvellyn and other challenging peaks are near the lake. The village has ample accommodation including two Youth Hostels and camp sites. The village of Pooley Bridge is at the northern end of the lake. Its narrow 16th-century bridge straddles the River Eamont as it flows out of Ullswater; it is overlooked by Dunmallard Hill, which was the site of an Iron Age fort. On the western side of the lake is Aira force waterfall. Near there the Brackenrigg Inn overlooks sweeping views of the dramatic landscape.

All content from Kiddle encyclopedia articles (including the article images and facts) can be freely used under Attribution-ShareAlike license, unless stated otherwise. Cite this article:
Ullswater Facts for Kids. Kiddle Encyclopedia.