Silloth (sometimes known as Silloth-on-Solway) is a port town and civil parish in the Allerdale borough of Cumbria, England. Historically in the county of Cumberland, the town is an example of a Victorian seaside resort in the North of England. 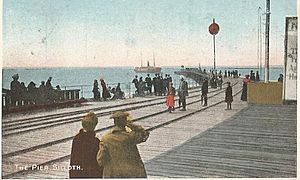 Silloth has long been a popular tourist destination.

Tourism is a major economic player in Silloth, with dozens of large and small static and touring caravan parks located within a ten-mile (16 km) radius of the town centre. This is responsible for the tremendous growth in the population on most days throughout the summer months. Although a couple of these parks are somewhat self-contained they still rely heavily on the town for support and infrastructure such as post office, doctor's surgery, chemist, newsagent's, mini supermarkets, hardware, spares and consumables, cafes, chip shops, sandwich bars and pubs. Silloth also plays host to several small annual events held on the town green. These include a beer festival held in September, its steam rally, kite and food festivals.

By far the area's largest annual event is Solfest. The Solway Music Festival (Solfest) is Cumbria's biggest four-day live music festival with a maximum attendance in 2008. Located at Tarns, approximately five miles away, Solfest has been running since 2004 and now regularly attracts crowds of over 10,000 every August bank holiday weekend, with its eclectic mix of music, site art and cabaret performers and the friendly atmosphere which resulted in it rocketing the town firmly back into national awareness by winning the "Best Family Friendly Festival" award in the 2007 UK Festival Awards (the only Cumbrian festival ever to win an award). Solfest has also been credited by Cumbria Tourist Board for introducing a younger generation of tourists to Silloth and in doing so has greatly boosted the future of tourism in the town.

Amenities include a championship golf course ranked amongst the country's top fifty courses, several hotels and bed and breakfasts, public houses, tea rooms and eateries. There is a local 'free' newspaper published monthly entitled 'The Solway Buzz' - distributed to households in the area by a team of volunteers - which covers news and events in Silloth and the surrounding area.

Silloth also prides itself in its coastline along the Solway Firth which has been described in one of the country's leading sea fishing publications, Total Sea Angling, as having the best flatfish fishing coastline in the country, with over 20 miles (32 km) of beach and promenade to choose from. Bait and equipment are also available locally. Wind and kite surfing are also popular along the coast at Allonby, 8 miles (13 km) from Silloth town centre.

In 2014, Silloth Tourism Action Group (STAG) received a grant of £9,600 from the Heritage Lottery Fund (HLF), to help fund research into both the history of Silloth Airfield and community memories from the war. The airfield opened in June 1939, just before the start of the Second World War, and closed on 31 December 1960. Originally designed to be used by RAF Maintenance Command, 22MU, the airfield was handed over to Coastal Command during November 1939. No 1 Operational Training Unit (OTU) was then responsible for training pilots and crews from the UK and Allied Countries. Therefore, the aerodrome had twin responsibilities, the maintenance and repair of planes for use in the war effort and the training of crews from allied countries to fly planes and help win the war. The HLF project ended in April 2015 with a celebratory evening and the launch of a short documentary film which traced the development of the airfield and its role during the War Years.

The railway to Silloth opened in 1856. The line passed through the villages of Kirkbride and Abbeytown to Carlisle. The railway carried both passengers and freight from the port. and tourists visiting the town. It was closed as part of the Beeching cuts in 1964.

Silloth is on the B5302 road, which leads to the A596 and the town of Wigton, and the B5300 which connects the town to Maryport.

Born in Silloth in 1903, Jim Brough played rugby union for Silloth and England. He played in the Cumberland side that won the county championship in 1924 and made his international debut against New Zealand in January 1925. He switched codes and played rugby league for Leeds and Great Britain, captaining the national side in 1936. As a coach, he took Workington Town to two finals in 1955 and 1958 before coaching the Great Britain touring team, which became the most successful touring side and the only touring team to score over 1,000 points. In 2005, Silloth RUFC renamed their ground in his honour.

Cecil Leitch was born in Silloth in 1891. A self-taught golfer, she won four British Ladies amateurs between 1914 and 1926. In total she won 12 national titles, 5 French Amateur Ladies and one Canadian Women's Amateur before retiring in 1927. During her playing career, she was one of the leading ladies in the sport and transformed the way that the game was played by women.

Kathleen Ferrier, a contralto singer, shot to fame while living in Silloth and performing in Cumberland. She died in 1953 at the age of 41 and Granta magazine wrote at the time that she "may well have been the most celebrated woman in Britain after the Queen". There is now a café known as 'Mrs Willson's' named in honour of this talented woman. This café is located on Criffel Street, overlooking the green.

All content from Kiddle encyclopedia articles (including the article images and facts) can be freely used under Attribution-ShareAlike license, unless stated otherwise. Cite this article:
Silloth Facts for Kids. Kiddle Encyclopedia.