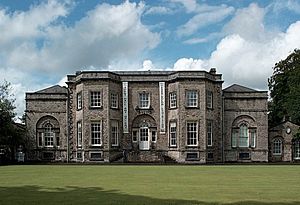 The gallery is a Grade I listed building

Abbot Hall Art Gallery is a museum and gallery in Kendal, England. Abbot Hall was built in 1759 by Colonel George Wilson, the second son of Daniel Wilson of Dallam Tower, a large house and country estate nearby. It was built on the site of the old Abbot’s Hall, roughly where the museum is today. Before the Dissolution of the Monasteries this was where the Abbot or his representative would stay when visiting from the mother house of St Mary's Abbey, York. The architect is unknown. During the early twentieth century the Grade I listed building was dilapidated and has been restored as an art gallery.

As of January 2021[update] Abbot Hall is closed to the public while Lakeland Arts carries out a redevelopment of the building and grounds.

Originally a town house, Abbot Hall was converted into an art gallery in 1957–62. The building is in stone on a plinth, with quoins, a belt course, a modillioned eaves cornice, and a parapet. The central block has two storeys with cellars, and there is a symmetrical east front of seven bays. Curved steps lead up to a central round-headed doorway in an architrave with moulded imposts, a projecting keystone, and an interlaced fanlight. This is flanked by two-storey canted bay windows, and outside these are recessed bays in one storey containing Venetian windows. The outermost two bays on each side are gabled, lower and further recessed, and have one storey. They contain two round-headed sash windows with an oval window in a pediment above. 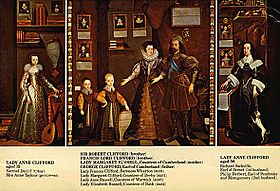 It has one of the most important collections of George Romney’s paintings in Britain and several of his sketchbooks and drawings. Paintings from the eighteenth century include a pair of views of Windermere by Philip James de Loutherbourg. There is also an important group of work by another local artist, Daniel Gardner. It has a significant collection of watercolours, mainly from the second half of the eighteenth and the first half of the nineteenth centuries. Many of the greatest watercolourists of the period are represented, including John Robert Cozens, David Cox, Peter De Wint, John Sell Cotman, John Varley and Edward Lear as well as J. M. W. Turner's watercolours The Passage of Mount St. Gotthard and Windermere (1821).

In 2011 a triptych of Lady Anne Clifford, entitled The Great Picture (currently (2011) in the ownership of the Lakeland Arts Trust) went on display.

The Victorian art critic and social commentator, John Ruskin, lived in the Lake District and the gallery has one of the most comprehensive collections of his drawings and watercolours. The modern collection concentrates more on painting but has sculptures by Barbara Hepworth, Jean Arp, and Elisabeth Frink. There are also works by Ben Nicholson, Kurt Schwitters, Bryan Wynter, Sean Scully, David Hockney, LS Lowry, Graham Sutherland, Victor Pasmore, David Bomberg, Hilde Goldschmidt and many others.

The gallery also has a display about English writer Arthur Ransome. His desk, typewriter and other memorabilia are exhibited. The gallery is also the official address of The Arthur Ransome Society.

All content from Kiddle encyclopedia articles (including the article images and facts) can be freely used under Attribution-ShareAlike license, unless stated otherwise. Cite this article:
Abbot Hall Art Gallery Facts for Kids. Kiddle Encyclopedia.